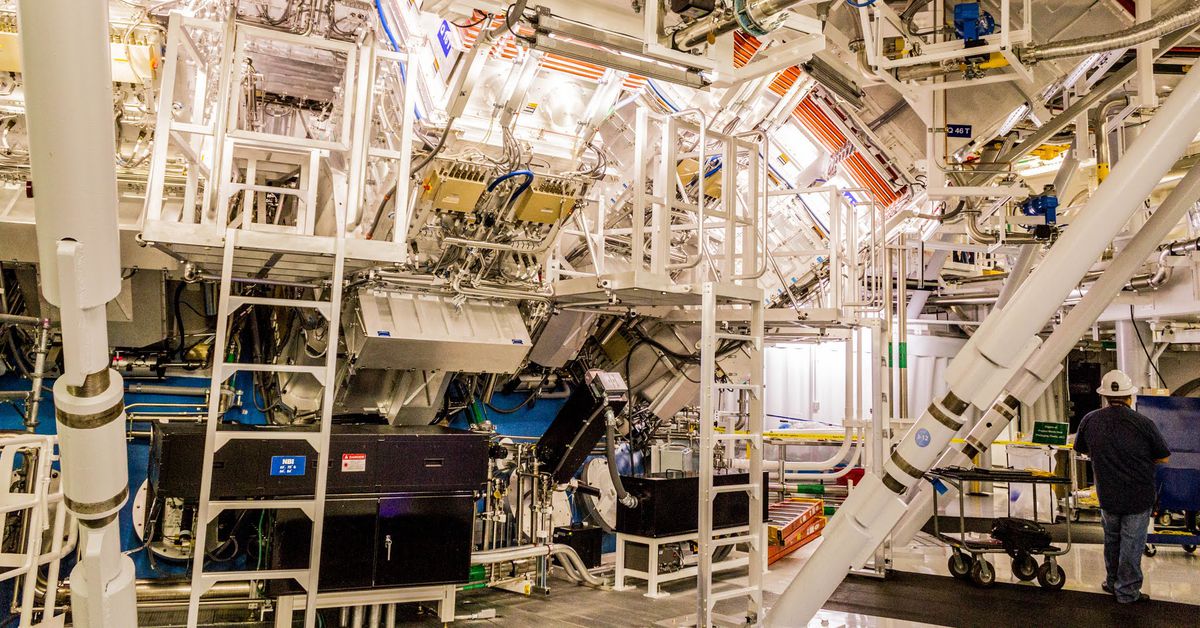 Researchers at the National Ignition Facility in Livermore, California, home of the world’s most powerful laser, announced on Tuesday that they crossed the critical threshold in their pursuit of fusion power: getting more energy out of the reaction than they put in.

This is 1) a massive scientific advancement, and 2) still a long, long (long) way off from harnessing fusion, the reaction that powers the sun, as a viable source of abundant clean energy. On December 5, the team fired 192 laser beams at a tiny fuel pellet, producing slightly more energy than the lasers put in, “about 2 megajoules in, about 3 megajoules out,” said Marvin Adamsdeputy administrator for defense programs at the National Nuclear Security Administration, at a press conference Tuesday.

To make fusion something that could actually produce electricity for the power grid, it can’t just inch over the ignition finish line; it has to blow past it. This announcement is an important incremental advance, but the breakthrough doesn’t go far enough to be of practical use. Because NIF itself is a research laboratory, its technology is not intended to produce power. So designing a fusion reactor to harness this new approach will be its own engineering challenge.

NIF is part of Lawrence Livermore National Laboratory, operated by the US Department of Energy. “This is what it looks like for America to lead, and we’re just getting started,” Energy Secretary Jennifer Granholm said on Tuesday.

The Financial Times first revealed on Sunday that a fusion breakthrough announcement was imminent.

BREAKING NEWS: This is an announcement that has been decades in the making.

On December 5, 2022 a team from DOE’s @Livermore_Lab made history by achieving fusion ignition.

This breakthrough will change the future of clean power and America’s national defense forever. pic.twitter.com/hFHWbmCNQJ

Nuclear fusion refers to the reaction where the nuclei of tiny atoms like hydrogen and helium collide and stick together, generating enormous heat, which could, in theory, be used to make electricity. That’s in contrast to the fission reaction used in conventional nuclear power plants , where large atoms like uranium are split apart. The trouble for fusion is that the nuclei are positively charged and thus repel each other. To get them to overcome their opposition, you have to get them moving really, really fast in a confined space and Create a high-energy state of matter known as plasma.

Scientists have struggled for decades to do this. There are two main approaches: One is to compress a tiny pellet of fuel with powerful lasers, which is NIF’s strategy. The other is to heat up plasma to temperatures hotter than the sun and contain it with magnets. This is how ITERthe world’s largest fusion project, currently under construction in southern France, will generate the reaction.

The sun and other stars can pull this off because they have enough matter to generate enormous gravity, which accelerates and confines atoms to create fusion reactions that produce the light and heat we can experience from millions of miles away.

Here on Earth, humanity has actually known how to produce fusion since 1952 — in thermonuclear weapons. Scientists have been able to produce fusion in laboratories as well, but only intermittently, and at great energy expense: Imagine using a blowtorch to light a match. The slow progress in pursuit of fusion has also made it a struggle to get adequate research funding, which in turn hammered progress.

In 1997, the National Academy of Sciences established ignition as the goalpost for fusion at NIF. It defined ignition as “gain greater than unity,” meaning more energy out of the fuel target than the amount of laser energy hitting it.

For months, scientists at NIF have gotten tantalizingly close. About a year ago, they said they were about 70 percent of the way there. “We’re on the threshold of ignition,” Tammy Maa plasma physicist at NIF, told Vox in January 2022.

“This result clearly surprises that mark leaving no question that they achieved fusion ignition in the laboratory,” said Carolyn Kuranza plasma physicist at the University of Michigan, in an email.

Troy Cartera plasma physicist at the University of California Los Angeles, explained that while NIF has achieved a massive breakthrough, it’s still short of what’s needed. As the National Academy of Sciences pointed out, the key metric is the fusion energy gain factor, also called “Q.” This is the ratio of the power used to start and maintain a fusion reaction compared to the power produced. A gain of 1 means the reaction has broken even. The latest announcement at NIF shows a gain of roughly 1.5, meaning the reaction has become energy-positive.

But that’s only if you define the energy input narrowly to the laser energy hitting the fuel target. If you measure from the total amount of energy needed to charge up and fire the laser, about 300 megajoules, the recent results are still far short. To actually produce more energy from fusion than the laser requires from the power grid, you would need a gain of 100 or more.

Another limitation is that NIF can only fire a few laser shots per day, and the amount of electricity required can sometimes cause blackouts at the lab. To run an actual fusion reactor, you’d need to fire about 10 shots per second.

The fuel itself could also stand to burn more efficiently. “The NIF shot only burned a small fraction of the fuel in the capsule,” Carter said in an email. “If you can find a way to burn up more fuel, the gain goes up substantially.”

That will involve tweaking the tiny fuel pellet to get more of the laser energy directed toward compressing atoms.

As for the laser, NIF is using dated technology that has a lot of room for improvement. The lasers are only about 1 percent efficient in terms of turning electricity to laser light, while more modern designs can be 20 percent efficient. “The NIF is built on 1980s laser technology,” said Kim Budildirector of the Lawrence Livermore National Laboratory, during a press conference.

Still, achieving ignition is a critical milestone and an important signal that scientists are on the right track. Carter said it “provides more justification for an aggressive push to develop and deploy fusion energy as quickly as we can, with the hope of impacting climate change !”

This story was also published in the Recode newsletter. Sign up here so you don’t miss the next one!

How CRISPR could help save crops from devastation caused by pests