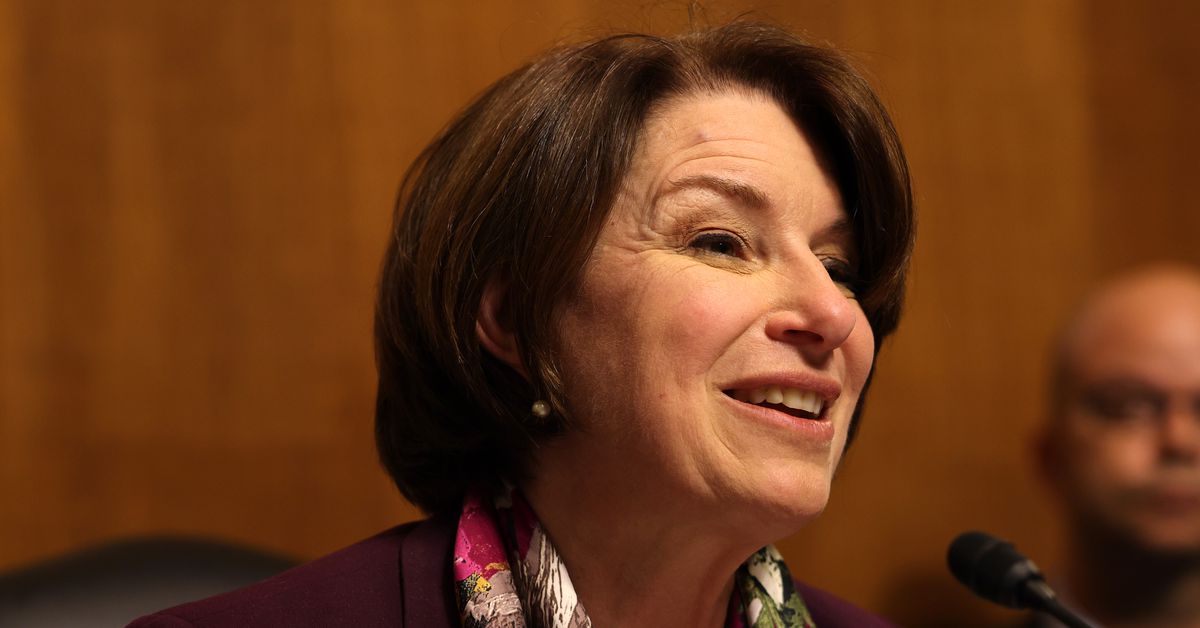 Amy Klobuchar’s antitrust push is not dead, the Democratic senator told Kara Swisher at the Code Conference on Tuesday.

“Never count us out when the cause is right and it’s something we need to tackle,” she said.

Klobuchar has been at the forefront of the antitrust push in Congress, sponsoring several bipartisan and bicameral bills aimed at Big Tech that would better regulate them and curb their immense power. Despite auspicious beginnings and what seemed to be a lot of bipartisan interest in passing at least some of those bills, they seem to have stalled out. Some haven’t made any progress at all; others are waiting for a floor vote that never seems to come.

“You need some kind of rules in place where you don’t have the gatekeepers also controlling who wins in the marketplace,” she said.

The American Innovation and Choice Online Act (AICO) is one of those bills, and it’s the one Klobuchar has arguably championed the most aggressively. It would ban dominant digital companies from giving their own products preference over those made by others on the platforms they own . So Amazon wouldn’t be allowed to put its own products higher up in search results in its Marketplace unless those products organically earned that spot, and Google wouldn’t be allowed to put its own maps or reviews above those offered by other companies in Google search results unless its maps and reviews earned that spot.

AICO is the only bill from the antitrust package to pass through both the House and Senate committee markups. As Klobuchar pointed out, it’s also the first competition bill since the beginning of the internet to advance to the Senate floor. All that’s left for it to head to the White House to get signed into law are two floor votes. In the Senate, it’s been waiting for a vote since January; in the House, it’s been waiting for over a year. Democratic leaders Rep. Nancy Pelosi and Sen. Chuck Schumer haven’t even scheduled a vote. It’s not clear why: Klobuchar and some of AICO’s sponsors, including Sen. Chuck Grassley (R-IA), say that the bill has enough votes between the two parties to pass the Senate. Schumer has said he’s not so sure about that, and won’t put it up for a vote until he is.

Klobuchar wouldn’t give an exact date for a vote or guarantee it’ll happen before midterms. She did say that the reason for the delay isn’t partisan dithering over content moderationas has been reported. It’s the time it takes for even bipartisan bills to pass, and it’s the money. Specifically, the amount of money the companies her bill targets have spent fighting it through lobbying and ads.

“It is really hard to take on these subjects when you have the biggest companies the world has ever known, that control an inordinate part of the economy, opposed to it,” she said. “It is an incredible amount of money I’m up against. I have two lawyers. They have 2,800 lawyers and lobbyists. So I’m not naive about the David versus Goliath.”

But Klobuchar also suggested that the deadline many have cited for the bills to pass — the midterm elections, when Republicans are predicted to take control of one or both houses of Congress — may not be a hard and fast one. Plenty of Republicans want Big Tech to have some guardrails, and she thinks they’ll continue on if they get control. She also doesn’t see them getting that control in the midterms as a sure thing. Her suggestion to Big Tech companies was to make the same concessions in the United States that they’ve made in other countries before they have to.

“I believe in our country in the end,” she said.

I Was There When: AI mastered chess

AI and data fuel innovation in clinical trials and beyond