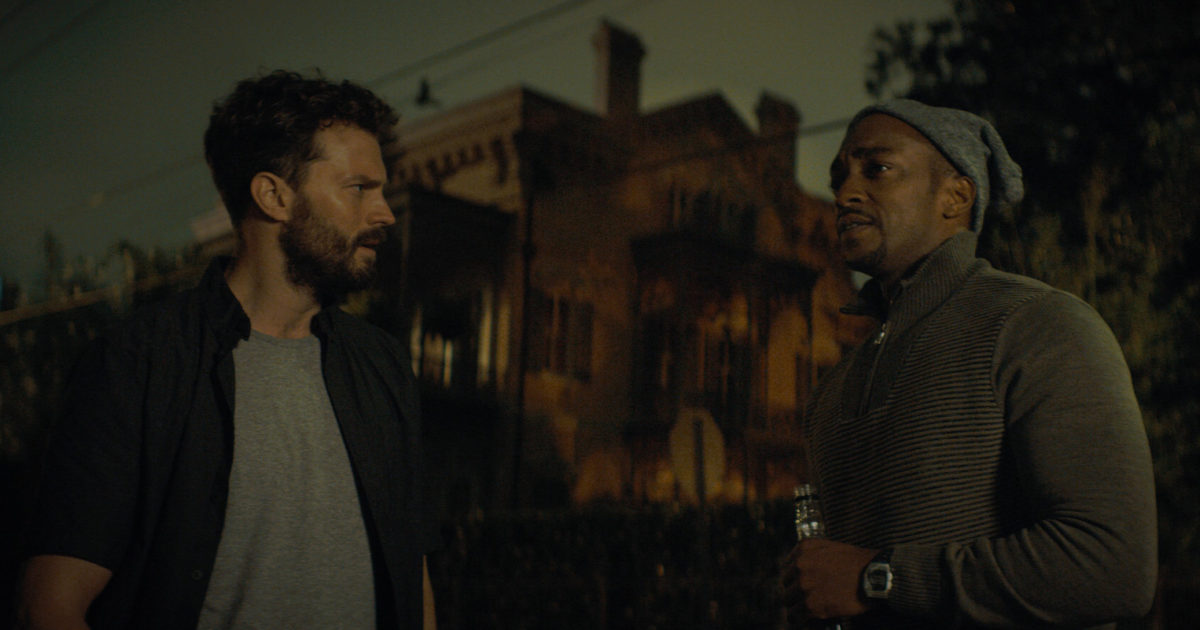 Justin Benson and Aaron Moorhead have created three of the best indie sci-fi films of the past few years—Resolution, Springand The Endless. In their latest movie, Synchronica paramedic played by Anthony Mackie discovers a designer drug that lets him visit the past.

“We were talking about, ‘What if there were a substance that made you experience time the way Einstein described it?’” Benson says in Episode 437 of the Geek’s Guide to the Galaxy podcast. “That is to say, that there’s no distinction between past, present, and future, and actually everything happens simultaneously, and time is more like a frozen river rather than a flowing river, and this substance—this drug—would allow you to experience that.”

The film is suffused with mood and color, much of which it draws from its New Orleans setting. Moorhead says it was important to set the film in a place that would be instantly recognizable at different stages of its history.

“With New Orleans, there’s just nothing like it,” he says. “It has this bizarre French and Spanish colonial history, as well as being very American—jazz and civil rights. Just an enormous history that is very, very, very specific to New Orleans. It occupies this wonderful bit of real estate in the American psyche.”

Benson says that time travel films tend to romanticize the past, focusing on manners and fashion rather than health care or social issues. “When you look at things like Back to the Futureit’s an amazing movie, but it does really gloss up the 1950s,” he says. “It’s something that’s been running through our media and our culture for a long time.”

Moorhead hopes that Synchronic will help combat that sort of reflexive nostalgia and give viewers a greater appreciation for the present. “It’s totally fine in any individual product to gloss up something or romanticize it,” he says. “It’s a choice. It’s not a moral failing of any individual product. But what we wanted to do was examine the other side of that.”

Listen to the complete interview with Justin Benson and Aaron Moorhead in Episode 437 of Geek’s Guide to the Galaxy (above). And check out some highlights from the discussion below.

“Someday we’ll have a movie that everyone knows about the day it comes out because it has a $20 million marketing budget, because that’s how you do that. But that’s really scary too, because it better be really good. It better be awesome , because it’s the thing that kids are going to talk about in school on Monday. It’s actually kind of funny, because you get a little bit of a pass as an indie filmmaker, because if it doesn’t make an impact, people are like , ‘Oh, that’s what happens to indie films.’ You’re only really as good as your best film, in a way, and if something comes and goes, it doesn’t really hurt you. It just happens. But if there’s a lot of marketing put behind a bad movie, that’s a threatening prospect.”

“Some of the most exciting times for us when we’re on set are when our characters just get to talk to each other about something that isn’t specifically in the logline of the movie, and you will be shocked at how rare that is . And by the way, the things they talk about inform the later plot, and inform their character, and push the movie along, it’s just that in that exact moment they’re not discussing what to do about a time travel pill. There’s a common wisdom in writing that if the dialogue isn’t pushing along [the plot]then you might as well cut it. But if you cut it, you get something soulless, and you don’t understand these people. Because you can only express yourself so much through action. Our primary means of expressing ourselves as humans is through the way we communicate with others.”

Aaron Moorhead on the pandemic:

“We’ll probably be able to attend a local screening [of Synchronic] here in LA, where I believe there are two or three drive-ins, because we do want to see what it looks like. But the thing that’s funny about the drive-in experience is that there’s no way to be ‘in person.’ Most of them don’t even allow you to stand on top of your car and address the audience or anything like that. So being there just means that you are in your own car watching the movie you’ve seen a billion times. So that’s the thing. We’re going to go, because it’s our premiere, but there’s no function to actually being in-person at a drive-in, because there’s no in-person aspect to it. There’s no in-person Q&A.”

“[Random numbers] come from a computer, and it’s very complicated how they arrive at them, but still you can find how they derived that randomness. But there is a way to get actual randomness, which is to measure quantum fields, because quantum fields are actually random. And so [randonauts] are able to take these measurements and get actually random numbers that truly cannot be predicted in the future. They take those numbers and turn them into coordinates, and they go to those coordinates, no matter how hard it is to get there, and in doing so they have broken out of their deterministic tunnel, because there is no world in which they would have gone to that place if they had not followed those numbers.”