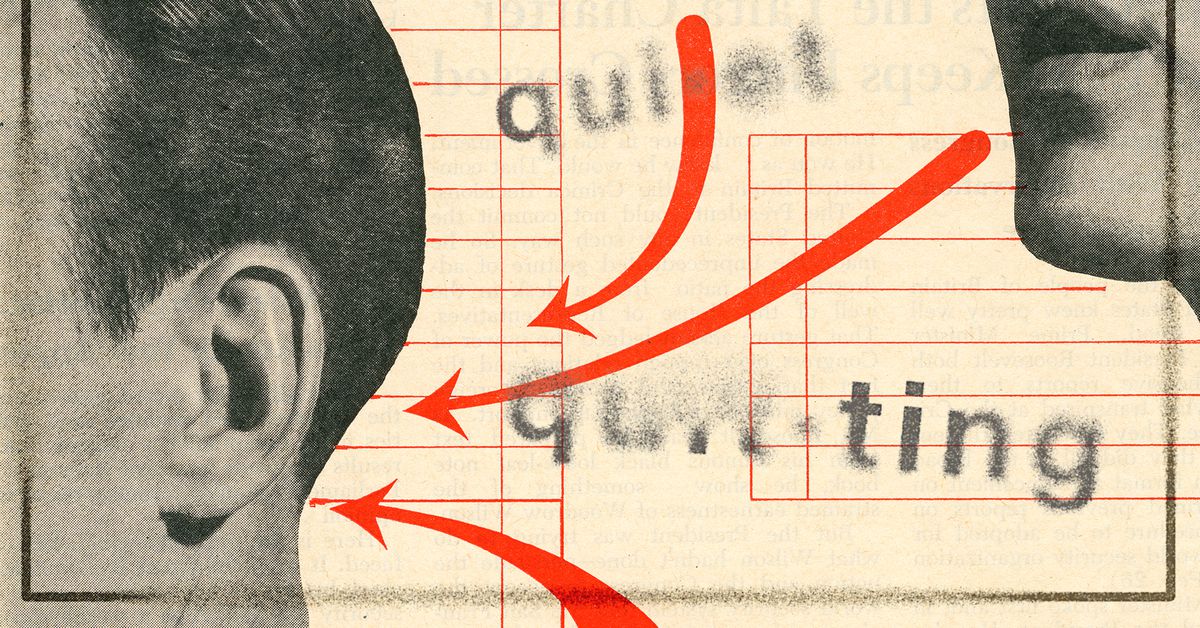 We — workers, experts, journalists, me — just can’t stop talking about work these days. And that’s not just because we spend much of our waking lives doing it.

Three years into a global pandemic that upended work for many Americans, we now find ourselves at the precipice of a recession that threatens to disrupt the way we work even further. Along the way, terms like the Great Resignation and quiet quitting have catapulted the 9 to 5 into the rest of our days. They manage to be both meaningless buzzwords that elicit eye rolls and succinct ways to capture real workplace phenomenon.

Quiet hiring is the latest term being thrown about. It describes the way Employers are trying to complete necessary tasks not by adding more employees but by asking existing workers to shift their roles. It’s a play on the term quiet quitting, which describes workers refusing to go above and beyond in their work. The term quiet quitting came about As a rationale for the Great Resignation, or Americans’ sustained willingness to quit their jobs in search of better ones during the pandemic. Work did not have to take priority in their lives, and if it did, they could quit.

When I first heard about quiet hiring, my first reaction was to groan and tell my editor, no, I will not write about this fake thing. I’m still skeptical about how the trend will play out but, after spending some time thinking about these terms and why we make them up, I’m more empathetic. For better or worse, these terms are powerful.

We don’t just glom on to these terms because they’re catchy. We keep using them because they describe something real that’s happening, and they help us make sense of the rapidly changing world around us and allow us to see ourselves within that world .

“We come up with terms to try and make the illegal legible — or, to play with the metaphor a bit, to create a grammar and structures that makes what’s happening feel understandable in some way,” Anne Helen Petersen, co-author of Out of Officetold me.

Of course, coming up with shorthand for what’s happening with work is as old as work itself. Mass layoffs beginning in the 1980s and 1990s were called “downsizing,” as companies came to think of these cuts as a sign of competitiveness rather than corporate failure. In some ways, “gig work,” popularized by apps like Uber around the 2010s, sprang from those cuts, as corporations sought to fill employment gaps as cheaply and efficiently as possible.

But now the whole process has become sped up, from recognizing a new phenomenon to writing about it to wanting to retract it. That’s not an illusion: The nature of work is changing quickly, and the pandemic only sped up that fact.

“What we’re seeing is an effort to try to relate changes in the way work is done to historical paradigm,” said Joseph Fuller, a professor at Harvard Business school who leads its Managing the Future of Work initiative. In other words, the nature of work is shifting, and these terms help us fit those changes into our worldview.

Perhaps the biggest reason these terms are so pervasive, however, is the simple fact that work is still such a strange and confusing place these days. The economy is supposedly collapsing, and yet there are still so many unfilled jobs. era of worker power, where wages are rising rapidly, but not rapidly enough to keep up with inflation. People find meaning in their work, but their work has become so demanding that it saps the meaning out of life.

So we create and perpetuate terms to help orient ourselves.

“If you come up with a snappy phrase, all of a sudden reporters are calling Harvard professors to ask about it”

But it’s also possible that our use of these terms has a circular effect. They’re coined because they’re happening, but then they happen more because people now have a language and a template to copy. Social media greatly amplifies that effect.

“We know through multiple, highly vetted and validated studies, that people like you doing something gives you psychological permission to do the same thing,” Fuller said. “It doesn’t matter if it’s cheating on your taxes or throwing a brick through a window or standing up and screaming like a maniac at your favorite sports team.”

And then there’s people like me, making matters worse.

“In a world of social media, if you come up with a snappy phrase, all of a sudden reporters are calling Harvard professors to ask about it,” Fuller said.

The Great Resignation was coined by Texas A&M University associate professor Anthony Klotz in a 2021 interview with BloombergHe used the term to describe the coming wave of quits as people left their jobs due to a variety of pandemic-related reasons, like wanting to work remotely and rethinking work’s place in their lives. Since then, pretty much every publication has written about the topic — applauding it, deriding it, renaming it, questioning its very existence. (“Great Resignation” now turns up half a billion search results on Google.)

The only thing certain about the topic is that around the start of 2021, Americans across industries were quitting their jobs at elevated rates, which have yet to truly return to normal. Structural factors like an aging population and lower rates of workforce participation also suggest that the trend, which began even before The pandemic put it into overdrive, has staying power.

Then came quiet quitting. The term was coined and then popularized on TikTok, where a user described it as “not outright quitting your job, but quitting the idea of ​​going above and beyond.” This was seen as a response to the hustle culture of the 2000s and the 2010s, where overwork was praised and jobs became a stand-in for community and identity. For many Americans, announcing boundaries with work reflected the acceptance of a more transactional relationship with work.

Quiet quitting was also one of the more insufferable terms out there, in part because it largely felt like a new term for something people have been doing forever: not making work the center of one’s life. As the Atlantic’s Derek Thompson has pointed outit’s also not necessarily happening at increased rates. Worker disengagement, despite ticking up slightly recently, has been remarkably steady over time, suggesting that the sentiment on TikTok wasn’t leading the battle against work but merely be reflecting feelings that have long.

That brings us to quiet hiring, which has been rolling around the internet in recent months. Inc. magazine used it last September to describe Google’s strategy to place overachievers into new roles within the company. And then Emily Rose McRaesenior director of research at Gartner and leader of its future of work research team, can take credit for popularizing the current iteration of the term, after her 2023 work trends report was picked up in a CNBC article last week.

To McRae, quiet hiring is asking existing employees to take on new tasks as well as using contractors to fill in needs at companies that are struggling to find workers amid the Great Resignation and cost-cutting. She told me in an interview that the term is more nuanced than trends that have been happening for decades, like “doing more with less” and “outsourcing.” Rather than individuals looking for more opportunities in an organization, McRae sees this as a management-led trend to try and make the best use of existing talent. It would also include compensating employees for their flexibility. A new survey From hiring site Monster found that 80 percent of workers have been quietly hired, which it described as “when an employee takes on a new role with new responsibilities at their same company, either temporarily or permanently, due to need.”

For her part, McRae says the naming of trends is an important responsibility and one she says she doesn’t take lightly.

“We’re gonna go into a room full of executives in a position of authority and say, ‘This is happening.’ By the very nature of doing that, we’re going to bring it into existence a little bit more.”

As with anything that goes out into the world, these terms about work grew and morphed over time. They were misinterpreted and even became misaligned with their original meaning. Their definitions are imprecise and changing, and the words themselves have likely become overused, sometimes to the point of meaninglessness.

Quiet quitting, for example, began as a reference to performing your basic duties and nothing more, but over time came to be interpreted by the managerial class as workers slacking off. The brevity of the term “Great Resignation” had many assuming that people were quitting their jobs to just coast, when the reality was that most were doing so to find better employment. It also missed that many of those quitting their jobs were doing so to retire early amid a dangerous pandemic.

As Harvard’s Fuller put it, “There are real phenomena under each of them, but the kind of banner headline does not capture the nuance of what’s actually going on.”

But even in their broad strokes, these terms can inspire people. The past few years are full of stories of people who’ve left their soul-crushing jobs in pursuit of more meaningful things, including finding other forms of work, spending time with family , and baking croissants. Language around things like “burnout” has helped Americans out of toxic relationships with work and has spurred others to unionize and make their jobs better.

Such flippant terms also have the ability to trivialize what are real concerns about things like workplace safety and fair compensation. Employers can take terms like quiet quitting to justify their worst impulses, like tracking. keystrokes or instituting performance reviews as a way to justify axing employees.

That doesn’t mean, however, that we won’t try to find the next “quiet X-ing” or the new “Great X.” Real problems at work remain.

What will also continue is our penchant to talk about these terms, whether or not we agree.

“I actually really appreciate that there is this pushback and backlash and reaction to it,” McRae, of quiet hiring fame, said. “Because that means that people really are interrogating it and not just totally running with it.”

Update, January 12, 5 pm: This story has been updated with data from a new Monster survey about quiet hiring.

Biden’s SOTU: Data Privacy Is Now a Must-Hit US State of the Union Topic

ChatGPT Has Been Sucked Into India’s Culture Wars