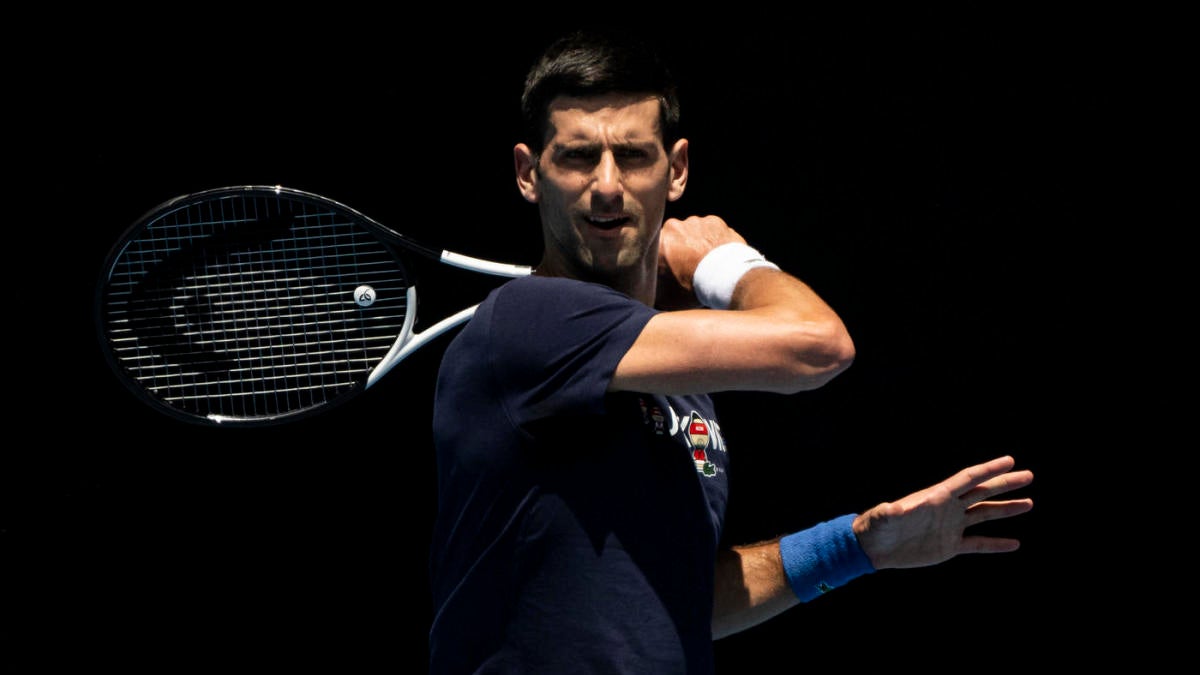 Novak Djokovic, the world’s No. 1-ranked men’s tennis player, had his visa reinstated ahead of the Australian Open. Still, it’s unclear whether the Serbian will be allowed to compete for a record 21st Grand Slam at the tournament.

Djokovic revealed Tuesday night he conducted an interview with the French newspaper L’Equipe last month after testing positive for COVID-19. The tennis star also acknowledged his travel declaration form contained falsehoods about his whereabouts the 14 days preceding his flight to Australia, which could serve as grounds for deportation.

On Monday, Federal Circuit Court Judge Anthony Kelly ruled Djokovic could stay in Australia after he spent four days quarantining in a Melbourne hotel. The Australian Open listed Djokovic as a No. 1 seed the following day.

Djokovic celebrated the judge’s ruling on Twitter, but celebration may be a bit premature. According to the Associated Press, Djokovic could still face deportation and a three-year ban from entering Australia if the government exercises a “personal power of cancellation.”

For four days, Djokovic remained under Australian Border Force (ABF) watch while awaiting the ruling on his visa. The 20-time Grand Slam winner attempted to enter Australia with a COVID-19 vaccine medical exemption for the Australian Open. But a court is deciding whether that tournament exemption applies to the country as well.

Since 2020, Djokovic has repeatedly refused to divulge his vaccination status and once said he was “opposed” to vaccinations entirely. The Australian Open instituted a COVID-19 vaccine mandate for all players on Nov. 19, and Djokovic announced he received a medical exemption to compete in the event on Jan. 4.

But after flying into the Melbourne airport on Jan. 5, ABF detained Djokovic and is now threatening deportation to his native Serbia.

His case is currently on hold until the court adjourns Monday. Djokovic is hoping to remain in Australia for the Open, which begins Jan. 17 in Melbourne, for a shot at a record 21st Grand Slam win.

Here’s everything you need to know about his situation, beginning with the latest news:

Deportation from Australia may be the least of Djokovic’s problems. Djokovic admitted Tuesday night to knowingly conducting an interview with the French newspaper L’Equipe while testing positive for COVID-19.

In an Instagram post, Djokovic explained how the incident occurred. He attended a basketball game in Belgrade, Serbia on Dec. 14 in which “a number of people” later tested positive for COVID-19. Djokovic says he took a rapid antigen test and PCR test two days later, getting a negative result from the rapid test.

On Dec. 17, Djokovic attended a children’s tennis event in Belgrade and again received a negative result from a COVID-19 rapid test. Djokovic’s PCR test, however, arrived after the event and was positive. Knowing the results from his PCR test, Djokovic conducted an interview and photoshoot with the French newspaper L’Equipe on Dec. 18.

Djokovic said he conducted the interview because “I didn’t want to let the journalist down,” but he now realizes it was a mistake.

“While I went home after the interview to isolate for the required period, on reflection, this was an error of judgment and I accept that I should have rescheduled this commitment,” Djokovic wrote.

If Djokovic did lie to Australian authorities about his positive COVID-19 test, he could reportedly face up to five years in prison.

In the same social-media post, Djokovic admitted his Australian travel declaration form contained incorrect information but cited “human error” from his support team as why. Djokovic declared he didn’t travel in the 14 days preceding his flight to Australia despite appearing in Spain and his native Serbia over that stretch.

A four-day stay in a quarantine hotel didn’t deter the Australian Open from making Djokovic a No. 1 seed. The tournament announced its seeds Tuesday, listing Djokovic as No. 1 with Daniil Medvedev, Alexander Zverev, Stefanos Tsitsipas and Andrey Rublev just behind him.

Djokovic had his visa reinstated a day earlier, but that doesn’t confirm his place in the Australian Open – or the country itself. Per the Associated Press, Government lawyer Christopher Tran said Australia’s immigration minister “will consider whether to exercise a personal power of cancellation.” If exercised, the government could deport Djokovic ahead of the tournament, which begins Jan. 17, and ban him from entering the country for three years.

Kelly reinstated Djokovic’s visa, allowing the world No. 1 to stay in Australia and prepare for the Australian Open. In his ruling, Kelly said Djokovic wasn’t given ample time to consult with his lawyers the night before his visa cancellation.

Djokovic spent the previous four days quarantining in a Melbourne hotel, but the Serbian remains “focused” on competing in the upcoming Australian Open.

“I’m pleased and grateful that the Judge overturned my visa cancellation,” Djokovic tweeted. ” …  I flew here to play at one of the most important events we have in front of the amazing fans.”

Djokovic may have flown to Australia to compete in the country’s Grand Slam tournament, but whether he’s allowed to play remains to be seen.

In an attempt to delay his deportation from Australia, Djokovic applied for a judicial review of the country’s decision to cancel his visa. Federal Circuit Court Judge Anthony Kelly said he’s yet to receive the application for a review of Djokovic’s visa, meaning the earliest Djokovic can be deported is Monday – when the case returns to court.

According to ESPN, Nick Wood, Djokovic’s barrister, requested the government not deport Djokovic until his case is fully decided. The judge opposed that idea, saying Djokovic could theoretically file “a cascading series of appeals” to remain in Australia for as long as he wants.

The issue regarding Djokovic’s visa seems to be the specifics of his COVID-19 vaccine medical exemption. Djokovic said he received an exemption to participate in the Australian Open, but Australian Prime Minister Scott Morrison is arguing he didn’t get one to enter the country.

While Djokovic waits, he’s staying at the Park Hotel Melbourne. The hotel, where the ABF commonly holds detainees, has reportedly faced multiple fires and a significant COVID-19 outbreak. Park Hotel Melbourne detainees were also served meals with maggots and mold, according to Australia’s SBS World News.

A day after Djokovic announced he’d play in the Australian Open, the country canceled the 34-year-old’s visa and denied his entry. According to The Age, Djokovic’s visa didn’t approve COVID-19 vaccine medical exemptions, forcing him to spend eight hours in ABF detention at the Melbourne airport.

Srdan Djokovic, Novak Djokovic’s father, told Serbian media his son was being held “captive” and rallied for people to “gather on the street” if he wasn’t released within 30 minutes. Morrison, meanwhile, viewed the situation quite differently.

“Rules are rules, especially when it comes to our borders. No one is above these rules,” Morrison tweeted. “Our strong border policies have been critical to Australia having one of the lowest death rates in the world from COVID, we are continuing to be vigilant.”

Serbian president Aleksandar Vucic also inserted himself into the situation, personally calling Djokovic and demanding he be immediately released.

“I told our Novak that the whole of Serbia is with him and that our bodies are doing everything to see that the harassment of the world’s best tennis player is brought to an end immediately,” Vucic posted on Instagram. “In line with all norms of international law, Serbia will fight for Novak, truth and justice. Novak is strong, as we all know.”

Djokovic revealed the Australian Open gave him a medical exemption, clearing the path for his participation in Melbourne. The nine-time Open winner announced the news via Twitter.

Less than an hour later, a Victorian government spokesperson explained the state’s decision. Djokovic – like other players seeking to avoid the COVID-19 vaccine via medical exemptions – underwent a two-stage process to meet the criteria. The first stage was submitting an application to Tennis Australia, and the second was having it reviewed by the Independent Medical Exemption Review Panel (IMRP).

With the Australian Open 19 days away, Djokovic withdrew from another tournament Down Under. Djokovic dropped out of the ATP Cup in Sydney three days before its start, forcing Serbia to give Dusan Lajovic his roster spot in the 16-country team event.

The ATP Cup, unlike the Australian Open, did not institute a vaccination mandate for players. However, some viewed Djokovic’s ATP Cup withdrawal as a precursor for an eventual Australian Open absence.

“If Novak shows up at the Australian Open, he’ll either be vaccinated or he’ll have a medical exemption,” Tiley said, per The Guardian.

Srdjan Djokovic expressed serious doubt over his son’s participation in the 2022 Australian Open. In an interview with Serb TV, Srdjan Djokovic explained why the tournament’s vaccine policy would likely keep Novak from defending his title.

“Under these blackmails and conditions, he probably won’t [play]. I wouldn’t do that. And he’s my son, so you decide for yourself,” Srdjan Djokovic said, according to BBC Sport. “… As far as vaccines and non-vaccines are concerned, it is the personal right of each of us whether we will be vaccinated or not … No-one has the right to enter into our intimacy.”

Adhering to his intimacy policy, Srdjan Djokovic said he didn’t know the vaccination status of his son and wouldn’t tell the public if he did.

Nov. 19, 2021: Australian Open announces players must be vaccinated against COVID-19

The Australian Open announced all players must be fully vaccinated against COVID-19 to participate in the 2022 event. It was the first time a Grand Slam tournament mandated players be vaccinated to play.

Initially, federal authorities indicated unvaccinated players such as Djokovic could compete in the Australian Open if they quarantined in Melbourne for 14 days. But Victoria premier Daniel Andrews demanded every player be vaccinated since all fans and employees would be.

“It is the one direction that you can take that you can ensure everyone’s safety, and all the playing group understands it,” Australian Open director Craig Tiley said, per The New York Times. “Our patrons will need to be vaccinated. All the staff working the Australian Open will need to be vaccinated, but when we’re in a state where there’s more than 90 percent of the population fully vaccinated — they’ve done a magnificent job with that — it’s the right thing to do.”

The policy didn’t affect most, as ATP chairman Andrea Gaudenzi said “above 80 percent” of the top 100 men’s singles players were vaccinated in November. It would certainly affect Djokovic, however.

In an attempt to slow the spread of COVID-19’s Delta variant, the Australian state of Victoria – the Australian Open’s host city – instituted a vaccination mandate for 1.25 million authorized workers. The mandate made workers get their first dose by Oct. 15 and second by Nov. 26 or face banishment from their workplaces.

Professional athletes were among those mandated, casting doubt over Djokovic’s participation in the Australian Open. Djokovic has repeatedly refused to say whether he’s vaccinated, and mandates like Victoria’s seem to be his main objection with getting jabbed.

“My issue here with vaccines is if someone is forcing me to put something in my body,” Djokovic told The New York Times last June. “That I don’t want. For me that’s unacceptable.”

Djokovic also said he was “opposed to vaccination” during an April 2020 Facebook Live chat, and he accused the media of spreading “fear and panic among people” with vaccine talk.