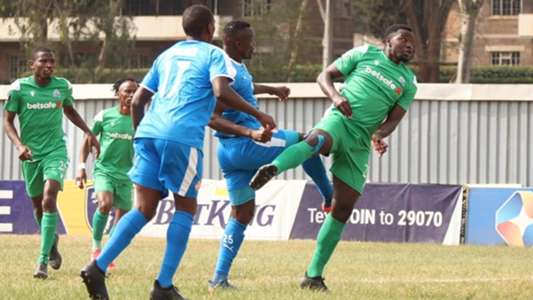 Gor Mahia chances of retaining the FKF Premier League title are slowly but fading away after registering a disappointing 1-1 draw against Nairobi City Stars on Saturday.

With table-toppers Tusker beating AFC Leopards 2-0 on Friday to open a seven-point gap, K’Ogalo needed to beat City Stars to remain in contention but they found themselves trailing in the 41st minute when Rodgers Okumu scored before they salvaged a draw courtesy of Jules Ulimwengu’s strike in the 54th minute.

The Simba wa Nairobi started the game on a lightning speed and with only five minutes played defender Bolton Omwenga delivered a good cross from the right wing but Gor keeper Gad Mathews moved quickly to punch the ball out for a fruitless corner.

In the 13th minute, City Stars had another chance to take the lead, a free-kick from outside the box was delivered by Peter Opiyo, but his effort went inches wide.

The missed chance awoke K’Ogalo who created a chance of their own in the 23rd minute, Fred Nkata combing well with Andrew Juma, but a through ball aimed at Clifton Miheso was intercepted by City Stars defender Abdallah Salim for a goal-kick.

Against the run of play, City Stars took the lead 41st minute as Rodger Okumu finished off a well-delivered cross from Anthony Kimani, leaving Gor custodian Mathews rooted to the ground without making a move.

On resumption, City Stars looked the better side as they raided Gor once again and it was Elvis Noor who hit the woodwork in the 48th minute after being put through by Ezekiel Odera.

However, Gor Mahia drew level in the 54th minute when Karim Nikiema waded past City Stars’ rearguard before unleashing a powerful shot which keeper Steven Njue punched back to play and Jules Ulimwengu reacted quickly to stab the ball home from the rebound.

After the goal, City Stars made a double change, goal scorer Okumu and Odera coming out for Ezekiel Ombija and David Agesa and five minutes later, Elvis Noor was rested for Timothy Ouma.

It was Ombija who almost gave City Stars the second goal in the 75th minute but his control after receiving the ball from Nicholas Kipkirui, he fumbled with the ball and it rolled out.