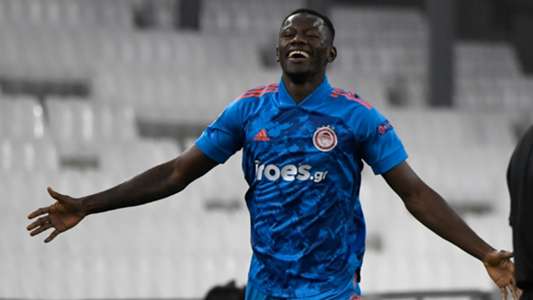 Mohamed Camara scored the only goal as Olympiakos grabbed a 1-0 win over Azerbaijani club Neftci in the first-leg of their Uefa Champions League qualifiers on Wednesday.

The 24-year-old broke the deadlock at the Stadio Georgios Karaiskaki in the 29th minute following a corner by Mathieu Valbuena.

A few minutes after his opener, Camara received a straight red card for a  challenge on Namik Alaskarov in the 43rd minute.

The goal separated both teams for 90 minutes and it gave the Greek champions a first-leg advantage for the return fixture at the Bakcell Arena on July 28.

Wednesday’s effort was Camara’s second goal in the Champions League after he opened his goal account in a group stage fixture against Marseille last December.

The Guinea international scored the Legends’ only goal in their 2-1 loss to the French Ligue 1 club.

Camara has been at Olympiakos since 2018 when he left French Ligue 2 club Ajaccio, and he has made himself a key player in Pedro Martins’ team with his contributions in the middle of the park.

He has won two consecutive Super League crowns with a Greek Cup with the Legends.

Elsewhere in Eindhoven, Mostafa Mohamed’s Galatasaray were thrashed 5-1 by PSV in another Champions League qualifiers.

The Egypt international was introduced as a 61st-minute substitute alongside Algeria’s Sofiane Feghouli while DR Congo’s Christian Luyindama and Nigeria’s Jesse Sekidika played the entire duration for the Turkish Super Lig club.