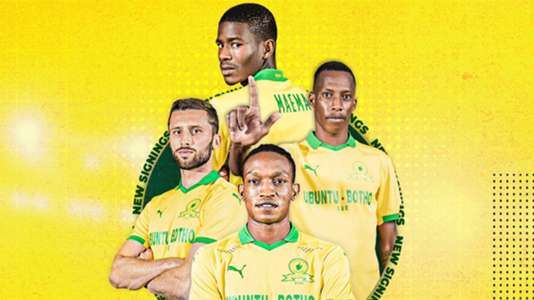 After making mass signings last season, Mamelodi Sundowns are back on the transfer market and have acquired the services of five new players so far.

On July 22, the Premier Soccer League  champions confirmed the signing of Sifiso Ngobeni from Bloemfontein Celtic and the left-back has joined the Pretoria club on a five-year contract.

Now focus is on how Masandawana’s new players will contribute in the quest to end the Caf Champions League title drought as well as campaigning for a fifth consecutive Premier Soccer League crown.

Masandawana have signed all their six new players on five-year contracts.

The latest is utility player Sifiso Ngobeni who joins Sundowns from  Bloemfontein Celtic to end speculation about the move.

After a good outing at the 2021 Cosafa Cup tournament, the 24-year-old follows his former Celtic teammate Neo Maema to Chloorkop.

This is a player who can play as a left-back or left side of midfield in what makes the Brazilians now have enough cover in those positions.

The defender who kept Salah in his pocket

Last week, Sundowns co-coach Rhulani Mokwena revealed they had been monitoring left-back Lunga for some years before bringing him to Pretoria from Golden Arrows in KwaZulu-Natal.

Mokwena said the Zimbabwean was just as good as a Masandawana player back in 2019 when he impressed them at the 2019 Africa Cup of Nations finals in Egypt.

In the opening game of the tournament, Lunga received much credit for marking Liverpool star Mohamed Salah out of the game which the hosts narrowly won 1-0.

The Sundowns coach describes the performance as having “put Salah in his pocket” in what convinced the Tshwane giants to chase after his signature.

The 26-year-old left Arrows after three seasons and is reunited with Brazilians senior coach Steve Komphela.

His arrival on a five-year deal could force the departure of Tebogo Langerman and will keep another left-back Lyle Lakay on his toes.

The two are said to have been in contact and the Amakhosi forward told his former foe in the Slovakian Super Liga that the PSL was an ideal destination.

The Serb and 26-year-old Safranko have both previously played for Dunajska Streda in Slovakia but at different times.

A Slovakia international has more than 10 caps since 2017, Safranko arrived at Sundowns with a record of being a well-traveled player, having turned out for clubs in Denmark, Scotland and finally Romania.

His last club was Sepsi OSK and it is yet to be seen if he will justify his five-year deal by forming a formidable combination with Peter Shalulile upfront.

Trying to avoid being another Maluleka

When George Maluleka signed for Sundowns from Kaizer Chiefs last year, the move was well-publicised.

There was so much expectation on the ex-Chiefs man but he went on to deliver below what he was believed to be capable of and even struggled for game time.

Kekana’s move to Masandawana from SuperSport United might not have attracted the same hype as Maluleka’s but he arrives at Chloorkop as a well-known player with a lot of PSL experience.

The 28-year-old is versatile and comfortable as a central defender or right-back which will see him battling it out for game time with Thapelo Morena, Ricardo Nascimento, Mosa Lebusa, Rushine De Rock and sometimes Rivaldo Coetzee.

Bangaly Soumahoro and Brian Onyango have their futures at stake following the signing of Kekana who has spent all of his professional career in Tshwane.

He spent nine seasons at SuperSport punctuated by a two-year stint at Pretoria University and has joined Sundowns on a five-year contract.

Maema has been playing PSL football for the past four seasons but his name is hardly mentioned.

This is a player who is moving from Bloemfontein Celtic for the first time ever in his professional career.

The 25-year-old attacking midfielder was the least expected player to end up at the Tshwane giants but he landed himself a five-year deal like other Sundowns new additions.

He will be on a mission to show why the Masandawana coaches settled for a player who is hardly mentioned when South African football is talked about.

Perhaps the Sundowns move will help his name become a much more familiar one in the PSL although it appears tough to achieve that in a star-studded Masandawana midfield.

Proving a point to Pirates

This is a player who is regarded as an Orlando Pirates reject after spending two-and-a-half difficult seasons at the Soweto giants.

Kutumela’s career appeared to be on a downward spiral following a transfer to Maritzburg United.

After spending two-and-a-half seasons at the Team of Choice, the striker thrived the most last season when he scored 12 league goals, his season-best in the PSL.

That earned him a five-year contract at Sundowns and the 28-year-old Limpopo-born player is now back in Gauteng.

Given another chance with a traditional giant, the question is, will he prove Pirates wrong that it was a mistake to let him go.

Having made five signings so far, it is difficult to pinpoint which department or position needs new additions at Sundowns.

But a number of players continue to be linked with the club.

SuperSport midfielder Sipho Mbule is rumoured to be a Sundowns target and the club might have to fight it out against Chiefs who are reported to be interested in the Bafana Bafana man.

Another reported battle for the Brazilians on the transfer market is for the signature Baroka FC forward Evidence Makgopa who is also said to be a Pirates target.