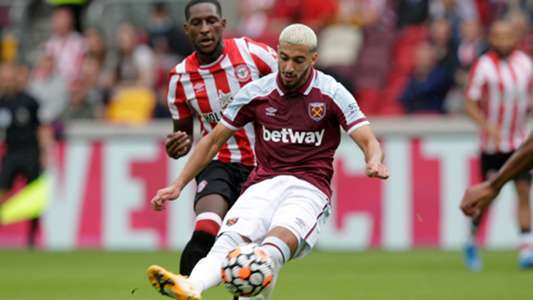 West Ham United defender Aaron Cresswell is confident Said Benrahma will score more stunning goals for the club in the 2021-22 season after his eye-catching strike against Brentford.

During Saturday’s pre-season friendly match, the Algeria international curled a shot from outside the penalty area into the top of the net to give the Hammers a 1-0 win over their hosts.

The goal was Benrahma’s third goal for West Ham since he left Brentford on an initial loan deal last October, before it was made permanent in January.

Creswell was not surprised by the ‘fantastic’ goal because it was not the first time he saw Benrahma show off his long-range shooting skills.

“The goal was fantastic and that’s Said all over. To get in that position, on his right foot, is exactly where you want him,” Cresswell told the club’s website.

“He’s done in plenty of times in training and I’m sure he’ll do it again.

“There’s still two weeks to go and It was a tough game against a good team, who got promoted last season. So it was a good workout for us.”

West Ham United boss David Moyes also commended the 25-year-old for Saturday’s strike and he hopes it builds his confidence before they open their Premier League campaign with a trip to Newcastle United on August 15.

“It was a good goal. He has been waiting on that one for a year, hasn’t he?” Moyes said.

“He practices it a lot and today he hit the target. Maybe it’s fitting that he did it here. He also scored at Celtic last week and it is good to build his confidence in that way.

“We have got a lot of hope that he will get in and find his goalscoring touch, and assists and all those bits to do with his game. We want good competition and hopefully, we’ll have lots of people threatening to score goals this season.”