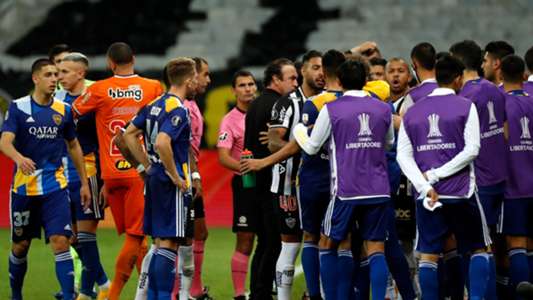 Eight individuals linked to the club, including several players, were held by authorities following a bad-tempered end to the clash

Boca Juniors have condemned the two VAR decisions they claim robbed them of Copa Libertadores victory over Atletico Mineiro, but played down the subsequent violent incidents that caused the team to spend Tuesday night sleeping outside of a police station in Belo Horizonte.

The Xeneize went down on penalties in the last 16 after drawing both legs 0-0.

But they also had a goal ruled out in both of those games for marginal infractions – Diego Gonzalez’s strike in the first leg was chalked off for a foul in the build-up, while on Tuesday, Gonzalez was judged to be slightly offside in the move leading up to Marcelo Weigandt’s second-half goal – either of which would have been sufficient to send them through to the quarter-finals.

“Boca Juniors suffered in this Copa Libertadores tie against Atletico Mineiro two inexplicable decisions overturning legal goals which have destroyed the sporting spirit of the continent’s most prestigious tournament,” read a statement from the club, published on Wednesday and signed by president Jorge Amor Ameal.

“Today our members, fans, players and coaching staff have been harmed in this foul manner, with this malicious and biased use of VAR technology.

“The events mark something which is unprecedented, the only case where a club has been eliminated from competition having won the two games of the tie.

“Situations like those we have experienced in the last games expose the biased manner in which our continental football is managed.

“Neither can we overlook the fact that the management of Atletico Mineiro encouraged violent and threatening messages for several days before arriving at the regrettable events in which our players, staff and directors were physically harmed, and who were held for more than 12 hours in awful conditions so as to not break the sanitary bubble.

“Once more we have been harmed by decisions unrelated to sport and connected far more closely to the standard of refereeing in a competition which does not deserve that.”

Back in Brazil, the entire Boca delegation camped outside a police station in Belo Horizonte overnight while officers took statements from eight team members who were involved in a violent altercation with security staff and police following the end of the second leg.

Sebastian Villa and Cristian Pavon were charged with throwing a water dispenser at security guards, while new signing Norberto Briasco allegedly assaulted an Atletico member of staff and attempted to hit the individual with an iron bar.

Ex-Manchester United and Argentina defender Marcos Rojo was also mentioned as an aggressor, with the police’s report additionally claiming that he grabbed and brandished a fire extinguisher pinned to the Atletico dressing room door.

Around midday local time (4pm BST/11am ET) on Wednesday Boca were permitted to leave the station, following the intervention of Argentina’s Ambassador to Brazil, Daniel Scioli, and went straight to the airport ahead of returning to Buenos Aires.