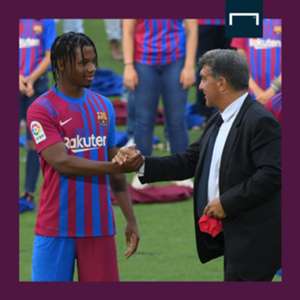 Currently headlining the wonderkids are Barcelona’s Ansu Fati and Ilaix Moriba, who are both 18 years of age.

Fati, now a full Spain international forward, was born in Guinea-Bissau while Moriba was born in Conakry, Guinea and has represented the Under-17 national team of his adopted country.

“It is exciting to see the new generation of Spanish stars, especially the ones with strong African roots,” Modise told La Liga.

“These are superstars that are still young, but are being given opportunities to play for big teams in Spain, like Ansu Fati and Ilaix Moribi.

“As Africans, we are everywhere and when given opportunities, whether in the country of their birth or adopted countries, you need to embrace it and take it with both hands.

“I think it is the new era of mixed football cultures that will be accepted and will bring in results, so it will be very interesting to see them justify that faith and really make it in football.”

Just like Fati and Moriba, Wolverhampton Wanderers winger Adama Traore, who has Malian roots, came through Barcelona’s La Masia youth set-up and is a Spain international but he played just one La Liga game.

Athletic Bilbao attacker Inaki Williams has represented Spain and while born in Bilbao, he has Ghanaian and Liberian parentage.

“In La Liga they put the emphasis on what makes football, football, which is the highly technical and tactically gifted abilities of footballers,” added Modise.

“It is such a special league, with a brand of football you cannot find anywhere else in the world.

“The emphasis is on the football culture and being respectful on the side of the player to play the football on the ground.

“That’s the philosophy Spanish football believes in and why for a footballer LaLiga is the league everybody with especially that level of technical ability wants to play in.”

The likes of Real Madrid legend Zinedine Zidane and more recently Nabil Fekir, who both have Algerian origins, also thrived in La Liga.