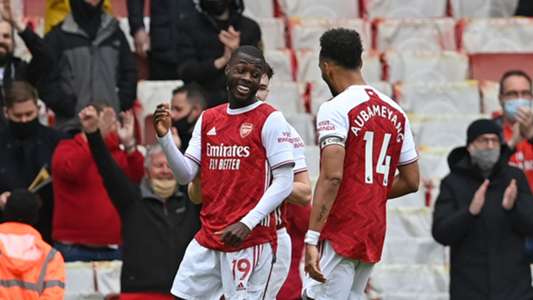 Folarin Balogun and Nicolas Pepe were among the goal scorers as Arsenal defeated Millwall 4-1 in Saturday’s pre-season encounter.

The Gunners took their preparations to the Bell Lane having played a 2-2 draw with Scottish Premiership side Rangers their last time out.

Against the English second tier side, Mikel Arteta’s men put up a good attacking display to send warning signals to other Premier League rivals ahead of the 2021-22 campaign.

Newly signed goalkeeper George Long was tested several times early in the game with the North London side aiming to break the deadlock. However, Pepe and Eddie Nketiah all failed to find the net.

Arsenal almost paid for their missed opportunities when Connor Mahoney’s free-kick was headed off the base of the goalpost by Jake Cooper, albeit, Arthur Okonkwo’s quick reflexes denied Benik Afobe from six yards.

Few minutes before the half-time break, Calum Chambers put the English topflight side ahead by heading home a rebound from Pierre-Emerick Aubameyang’s scissor-kick on the edge of the box.

Few minutes into the second half, Lacazette registered his presence by doubling his team’s advantage. He put the ball beyond Long after he was teed up by Chambers who found space in Millwall’s area.

For Arsenal’s third goal, Gabonese star Aubameyang occupied a pocket of space, ran at his before sending across a low delivery. Lacazette stepped over the ball, leaving Pepe with a simple finish from 10 yards.

Super-sub Balogun extended the lead having combined well with Brazilian star Willian to slot into the empty net after rounding the keeper.

Notwithstanding their strong performance, Arteta’s side could not keep a clean sheet as Alex Mitchell’s close-range finish gave the Lions something to cheer about.

Gary Rowett’s Millwall will continue their pre-season campaign with trips to Gillingham and Ipswich Town.

For the Emirates Stadium giants, they take on reigning European kings Chelsea on Sunday, August 1 in the Mind Series – a fixture aimed at supporting better mental health.

Money raised from the series will be divided between Mind and each of the club’s charitable foundations who all deliver projects to support mental health.