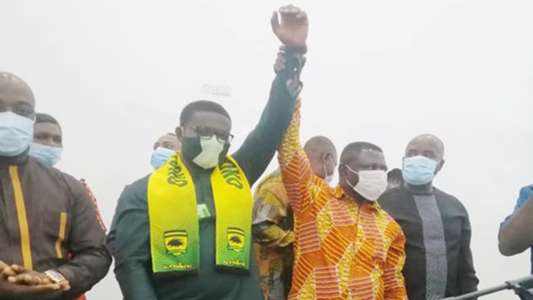 Asante Kotoko chief executive officer Nana Yaw Amponsah believes they could have won the Ghana Premier League had they not had to play their home matches on neutral ground.

Ahead of the final round of matches, Kotoko hold the second position on the league table, with arch-rivals Hearts of Oak already confirmed as champions.

“If we had played at the Baba Yara Stadium, we would’ve won this league with a 10-points gap because at some point, we were leading Hearts of Oak with four points,” Amponsah told Happy Sports.

“But we thank God we didn’t disgrace ourselves, considering all the disadvantages.

“Some of the refereeing decisions that went against Kotoko this season, I believe if it was at the Baba Yara Stadium, the fear of God will be in some people.

“We all know that home advantage plays a key role in our football.”

Amponsah also shed light on their unsuccessful attempt to sign Ghana legend Asamoah Gyan, who returned to the domestic league ahead of the start of the season after 17 years abroad.

The veteran striker was widely linked to the Kumasi-based side but sensationally joined Legon Cities on transfer deadline day, much to the disappointment of the Porcupine fraternity.

In the forward’s stead, Kotoko secured the services of Brazilian attacker Fabio Gama.

“At some point, we wanted Asamoah Gyan. We pushed but it didn’t happen then we opted for Fabio Gama,” the CEO said.

He also called for calm among the supporters following the turn of events this term.

“I will plead with our supporters to exercise patience because we will never have a perfect team but then we have a formidable team. If I signed five players and three or more are performing, is that a failure?” he asked in conclusion.

Amponsah was appointed as Looking CEO in August last year.