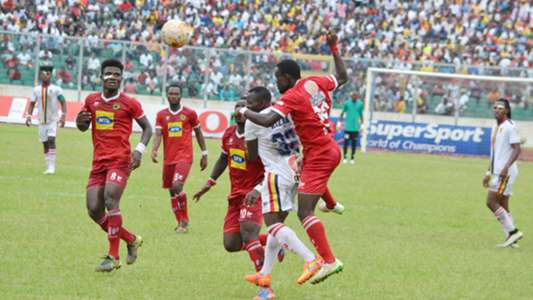 Hearts of Oak claimed bragging rights, three points and an advantage in the title race as Daniel Barnieh Afriyie struck to ensure a 1-0 home triumph over rivals Asante Kotoko in the Ghana Premier League on Sunday.

The Ghana U20 captain found the back of the net after half-time in the top-of-the-table clash, his goal ultimately ending as the separating factor in the matchday 31 fixture at the Accra Sports Stadium.

While teams were tied on points heading into the Super Clash, the Phobians have now moved three points clear in the lead, with only three more rounds of matches to go.

Hearts coach Samuel Boadu entrusted Afriyie to lead the side on the day, with support from playmaker Razak Salifu and winger Patrick Razak. Ghana international Mohammed Alhassan was deployed at centre-back.

Brazilian midfielder Fabio Gama, who scored and set up another goal in Kotoko’s last match against Karela United, was expected to turn on the magic for the Porcupine Warriors once again, alongside Ghana centre-back Ismail Abdul Ganiyu.

The hosts began strongly, taking the game to the visitors and won two corner kicks within the first two minutes.

In the fourth minute, Hearts tested Baah after Salifu played a short free-kick to Emmanuel Nettey, but the latter’s shot was no worry for the goalkeeper.

At the opposite end once again, Baah had to react appropriately to keep out Mohammed Fatawu’s effort after he received a looping pass from Frederick Ansah Botchway.

After the half-time break in the 62nd minute, Gyamfi attempted to find the back of the net with a first-time shot following a Gama through-ball but the shot went off target.

In the 66th minute, Afriyie finally broke the deadlock for the Phobians from close range, shooting first-time on a half-turn beyond Baah after a low shot was drilled into the penalty box.

Kotoko tried to mount a comeback, but with their struggle to create clear-cut scoring chances, they were left helpless as referee Daniel Laryea brought the game to an end after four minutes of injury time.