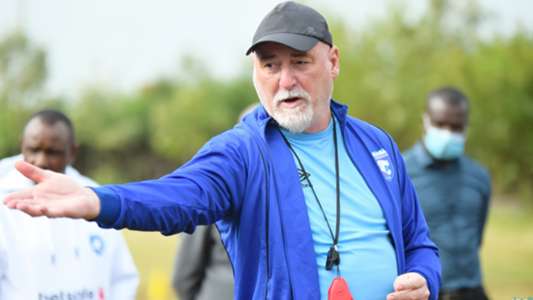 AFC Leopards coach Patrick Aussems has once again hit out on poor officiating in his team’s 3-2 loss to Western Stima at Nakuru ASK grounds on Tuesday.

Ingwe went into the fixture seeking to bounce back after losing 2-0 against leaders Tusker, but they found it tough after the Powermen scored through Michael Karamor in the 13th and 15th minutes, and Geoffrey Ojunga in the 89th minute, to seal a double over them this season.

Collins Shivachi scored in the 87th minute with Boniface Mukhekhe scoring the second in the fifth minute of added time, but it was too little too late for the 13-time league champions.

The former Simba SC coach conceded defeat but was unhappy with the way the match was officiated.

“We were very bad in the first half so we were punished, we played well in the second half… we created chances but lacked efficiency in front of goal,” Aussems told Goal.

“But the biggest problem, I don’t want to complain or cry, but I think you should talk about officiating. It was poor and for football in Kenya, I don’t understand.
I accept the defeat, and congratulate Western Stima but [the officiating] every weekend is terrible.

Are Leopards still in the title race?

After Tuesday’s loss, Ingwe are third on the log with 43 points, 12 less than leaders Tusker FC. Leopards have won 13 matches, drawn four, and lost eight games.

The Brewers have played 26 matches and managed 16 wins, seven draws, and three losses. KCB are in second position with 48 points from 24 matches. They have won 14, drawn 6, and lost four games.

“We are out of the title race and my focus is helping the players to prepare for the next season by winning the remaining matches,” Aussems stated.

“I hope these guys in black and yellow [referees] will let us win.”