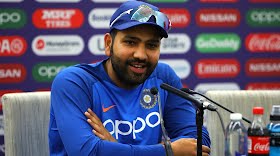 Team India captain Rohit Sharma described the side’s comprehensive 68-run win in the first T20I on Friday against West Indies at the Brian Lara Stadium in Tarouba, Trinidad as a great team effort.

Sent into bat after losing the toss, the Men in Blue put up a competitive 190 for 6 on the board as skipper Rohit himself top-scored with 64 off 44 at the top. Coming in at the death, Dinesh Karthik smashed an unbeaten 41 off 19 to lift India from a somewhat precarious 138 for 6.

The bowlers then chipped in to reduce the West Indies to 122 for 8. Arshdeep Singh, Ravichandran Ashwin and Ravi Bishnoi all claimed two wickets each for India as the Windies never got into any sort of momentum in their innings.

Speaking at the post-match presentation ceremony, Rohit said, while reflecting on India’s win, “We want to do certain things, and I think we are able to achieve certain things. All in all, it was a great effort. We want to continue doing that. But again we need to understand what sort of pitche play on.”

Elaborating on the importance of surfaces while planning their tactics, the 35-year-old India captain added, “Certain pitches will not allow you to do that (attack). So, you will have to take a backward step and see how you can play in those overs. The guys have a lot of skill, they have played on all sorts of pitches back home. They just need to back those skill sets.”

While Rohit and DK excelled for India with the bat, Shreyas Iyer, Rishabh Pant and Hardik Pandya fell cheaply, scoring 0, 14 and 1 respectively.

Talking about the assessment of the playing conditions, Rohit Sharma said, “The nature of the pitch, we knew was slightly going to be tough. The shot-making was not easy at the start. At the same time, we do understand that the guys who are set need to carry on as long as possible. There was some grip for the spinners. The odd variation wasn’t easy to pick.”

Asked for his views of the surface specifically for the first T20I, Rohit said the pitch was slow and not an easy one. He added, “The way we finished off the first innings, getting to 190 was great. I really thought this wasn’t t the pitch where you could get 170-180 when we were batting in the first half of the innings. But we hung in there, backed our skills and got more than a par score.”

Rohit also thanked the crowd in the West Indies for their support and added, “I love playing here in West Indies. The Indian team always receives great support from the Indian crowd coming in from the USA and also the local crowd here, quite superb to get such support.”

India will take on the West Indies in the second T20I on August 1 at St Kitts.