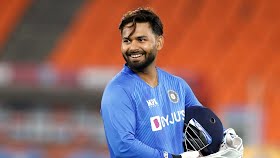 The T20I series will begin on Thursday (June 9) with the first match at the Arun Jaitley Stadium in Delhi, Pant’s home ground. Asked for his reaction on being named captain, the 24-year-old said, “It is a very good feeling, did not come under very good circumstances but at the same time I am feeling happy. I would like to thank the BCCI for giving me this opportunity to lead the Indian side. I will try to make the most out of it.”

Thanking all his well-wishers for supporting him in my journey through the thick and thin of his cricketing career, he added, “I will look to make it a base and keep improving and keep making my life better and better each and every day. “

Pant recently led the Delhi Capitals (DC) during IPL 2022. Although the franchise failed to qualify for the playoffs, the left-handed batter asserted that experience of leading in the T20 league will stand him in good stead. He commented, “It is a great feeling, especially getting an opportunity to lead in your home town. I will try to make the most of it. I think as a captain, it will help me a lot (leading in the IPL) because when you are doing the same thing again and again, you improve. I am someone who keeps learning from his mistakes and I think it will help me in the coming days.”

The captain stated that there wouldn’t be too many changes in the batting since Rahul would have opened if he was fit. Ruturaj Gaikwad and Ishan Kishan are the opening options India have in their T20I squad for the series against South Africa.

During the press conference, Pant admitted that they are certainly playing every white-ball series keeping the T20 World Cup in mind. Asked about the preparations, the young leader replied, “I think as a team we have thought about certain goals we want to achieve as a team. At the end, we have the World Cup at the back of our head and we are preparing for that. In the coming days, you will see there will be changes and how we play cricket I guess.”

While Pant will lead India in the five-match T20I series, all-rounder Hardik Pandya has been named as vice-captain.