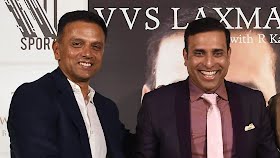 The Board of Cricket for India has made certain changes since the start of the Year. BCCI has created a roadmap for the upcoming ODI World Cup in 2023 which will be hosted in India, during the review meeting with Rahul Dravid (head coach), and Chetan Sharma (chief selector) which took place on 1st January 2023.

However, it has come to light that the BCCI has founded the replacement of current head coach of Team India Rahul Dravid. According to a report by News18, Dravid’s contract will come to an end in November 2023, after the ODI World Cup and it will be former Indian batsman VVS Laxman who will take over him once his tenure ends. VVS Laxman is currently serving in Bangalore as the director of National Cricket Academy (NCA).

VVS has earlier replaced Rahul Dravid for some time when he was on a break after a drastic 10 wickets defeat by England in the T20 World Cup semi-finals for the T20I and ODI series with New Zealand in November 2022.

This is not the first time when Laxman will be in-charge of Indian team, VVS has previously couched team India during the Asia Cup 2022, when Dravid was down with Corona Virus and was also there with the team during the tours of Zimbabwe and Ireland .

Laxman not only works as the director of NCA to develop future Indian cricketers, but he also traveled with the India Under-19 squad for a victorious 202 U-19 World Cup.

Dravid had a tough time as the head coach of Team India as they lost an ICC tournament and failed to make it to the finals of the Asia Cup.