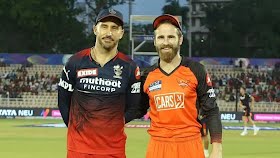 The Sunrisers Hyderabad (SRH) will take on the Royal Challengers Bangalore (RCB) in match number 54 of the Indian Premier League (IPL) 2022 at the Wankhede Stadium in Mumbai on Sunday. The will be the day game of the double-header and hence will begin at 3:30 PM. After five consecutive wins, SRH have now registered three consecutive losses. They have now slipped to sixth position in the points table. As for RCB, they are fourth, with six wins and five losses.

In their previous match, Hyderabad were thumped by the Delhi Capitals (DC) by 21 runs. Bowling first, they conceded 207 runs as Umran Malik and Sean Abbott were taken to the cleaners. Since his five-wicket haul, Malik has seen the flip side of pace as he has been clobbered.

Their batting is doing a decent job with Abhishek Sharma, Rahul Tripathi, Aiden Markram and Nicholas Pooran all in form. Ironically, it is the captain that’s letting the team down. Though Kane Williamson has scored some runs, his strike rate has been abysmal.

RCB came up with a good performance in their last match against the Chennai Super Kings (CSK) to register a much-needed win. Faf du Plessis and Virat Kohli got starts, Mahipal Lomror gave the innings momentum in the middle while Dinesh Karthik did another impressive finishing job.

Harshal Patel found some much-awaited form with a three-for. Josh Hazlewood was brilliant as ever. But it was Glenn Maxwell who was the surprise factor with 2 for 22.