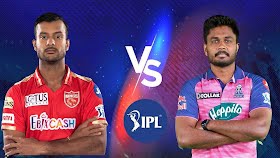 The Punjab Kings (PBKS) will take on the Rajasthan Royals (RR) in match number 52 of the Indian Premier League (IPL) at the Wankhede Stadium in Mumbai on Saturday. This will be the first match of the double-header and hence will begin at 3:30 PM. Punjab have had an inconsistent run in IPL 2022 and find themselves at the seventh position in the points table, with five wins and an equal number of losses. Rajasthan have fared slightly better. They have six wins and four defeats and are in third place currently.

PBKS registered a much-needed win in their last match against the Gujarat Titans (GT). Their bowlers came up with an excellent effort to reduce GT to 143 for 8, bowling first. Kagiso Rabada starred with a four-wicket haul while Sandeep Sharma conceded only 17 runs in his four overs. The overall bowling effort was praiseworthy

In the batting, Shikhar Dhawan led the way with an unbeaten half-century while Bhanuka Rajapaksa yet again proved his value with a quick knock. Liam Livingstone came in and went absolutely berserk at the end. The form of Mayank Agarwal and Jonny Bairstow remains a concern.

Rajasthan have lost a bit of momentum as they have gone down in their last two matches. Against the Kolkata Knight Riders (KKR), they were under par with the bat and had to face the consequences. Sanju Samson scored a slow fifty as RR posted 152 for 5. Their overdependence on Jos Buttler seems to be hurting them

One can’t pick too many faults in the bowling as they did not have a good enough total to defend. Ravichandran Ashwin, Prasidh Krishna, Yuzvendra Chahal and Kuldeep Sen have been doing a good job. In the last match, Trent Boult also found some rhythm.