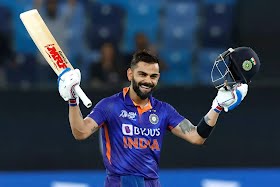 Senior Team India batter Virat Kohli has stated that he realizes he cannot play on for ever and wants to enjoy his playing time. He asserted that he is in a happy space and is approaching every game as if it is his last

The 34-year-old was Player of the Match for his brilliant 113 off 87 balls in the first one-dayer against Sri Lanka in Guwahati on Tuesday. He hit 12 fours and a six in his innings as the Men in Blue put up 373 for 7 on the board after being asked to bat first by Sri Lanka.

Speaking at the post-match presentation, after deservedly being named Player of the Match, Kohli said, “I don’t think there was anything different. My preparation and intent always remain the same. I thought I was hitting the ball nicely. It was close to the template I play with, I understood we needed an extra 25-30 runs. I tried to understand the conditions in the second half.”

The 34-year-old added that tried to get a comfortable total for India on the board, stating that he wasn’t desperate, having learned that it gets you nowhere. He elaborated, “You do not need to complicated things. You go out there and play without any fear, I can’t hold on to things. You have to play for the right reasons and almost play every game like it’s your last and just be happy about it. The game is going to move on. I am not going to play forever; I am in a happy space and enjoying my time playing.”

After Kohli’s special knock put India in the driver’s seat, Umran Malik (3/57) and Mohammed Siraj (2/30) ensured Sri Lanka did not get into any position to chase down the total. Opener Pathum Nissanka contributed 72 off 80, while Shanaka scored a blazing hundred. However, Sri Lanka never came close to threatening India’s massive total.

The second ODI of the series will be played at the iconic Eden Gardens in Kolkata on Thursday, January 12. Sri Lanka will have to win the game to stay alive in the series.