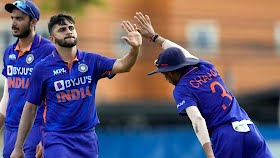 There was an element of surprise when India decided to go in with all-rounder Shardul Thakur ahead of fast bowler Umran Malik in the first one-dayer against New Zealand in Hyderabad. The latter had done pretty well in the recent matches that he had played until he was rested.

Thakur proved expensive in the opening ODI. However, he did pick up two wickets, including the last one of centurion Michael Bracewell to confirm victory for the Men in Blue. Whether Thakur’s efforts will be enough for him to retain his place ahead of Umran in The playing XI for the second ODI in Raipur on Saturday, January 21 remains to be seen.

At a pre-match press conference, India’s bowling coach Paras Mhambrey shed light on the move to play Thakur in place of Umran in Hyderabad. He said, “That (batting) is one of the reasons why we picked him (Thakur). He adds depth to the batting. We will have to see the surface and decide the combination accordingly. He has performed well for India.”

The former India pacer, however, asserted that Umran very much remains in the scheme of things for the 2023 ODI World Cup, along with a few other fast bowlers. Praising the Jammu & Kashmir pacer, Mhambrey said, “The way he has progressed, it is very heartening to see. Pace does matter and adds a different dimension to the attack.

“The decision of playing him will depend on the surface and the requirement of the team combination. He is very much in the scheme of things as far as the world cup is concerned. He adds a lot of value to the team,” he added .

The topic of Indian bowlers’ inability to clean up the tail also came up for discussion during the media conference. While some critics have come down hard on India for allowing New Zealand to post 337 in a chase of 350, the bowling coach wasn’t as harsh. He explained, “When you score 350 on a surface like that you expect partnerships from the other side, they lost six quick wickets but you expect in a game like that, there will be a partnership, and they bat till 8. Santner is a handy batter as well.

“What is important is you win games, you may be tested. We have charted out things we wanted to focus on and implement in this game. We are not looking at too much experimentation but we need to test players that we have shortlisted,” The former Mumbai cricketer concluded.