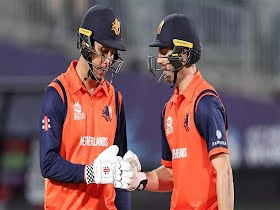 Netherlands defeated United Arab Emirates by three wickets in match number two of the ICC Men’s T20 World Cup 2022 at the Simonds Stadium in Geelong on Sunday, October 16. Batting first after winning the toss, UAE came up with a disappointing performance and were held to 111 for 8.

Opener Muhammad Waseem top-scored with 41 off 47 balls, but no other batter from the team reached even 20. Vriitya Aravind’s 18 was the next best score in the UAE innings. For Netherlands, Bas de Leede was superb with figures of 3 for 19 . In fact, all three of his wickets came in the same over, the 19th of the innings. Fred Klaassen also impressed with 2 for 13, while Tim Pringle was also economical with 1 for 13 from his four overs.

In the chase, Netherlands lost opener Vikramjit Singh for 10. However, Max ODowd looked in good touch and eased his way to 23 with the aid of three fours and a six. Siddique gave UAE some hope, cleaning up ODowd. De Leede (14 ) was then brilliantly caught by UAE skipper Chundangapoyil Rizwan off Karthik Meiyappan’s bowling.

After Colin Ackermann’s dismissal for 17, Siddique returned to dismiss Tom Cooper (8) and Roelof van der Merwe (0) in the 14th over. At 76 for 6, it was anybody’s match. However, Pringle (15) and Dutch skipper Scott Edwards (16*) added 27 runs for the seventh wicket to put the chasing side on top. Despite Pringle’s dismissal, Netherlands got home with one ball to spare.

Speaking after the win Netherlands captain Edwards admitted that things got nervy in the end but said that he was relieved the team got over the line. He said, “I think it was about making the most of the powerplay, we knew it was going to be tough through the middle and saw it throughout their innings. We lost too many wickets when we were about to get going. It was just about being busy, play low risk, take it deep.”

UAE skipper Rizwan described the defeat as heartbreaking. He commented, “We had given our heart and soul into it but if we had grabbed those chances, especially mine, it would have made the difference. It is not that easy to chase here, we saw the last match and Sri Lanka almost collapsed before 100. We told the boys it is never over till the last ball and we tried to instill that belief.”