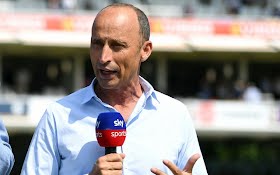 Former England captain Nasser Hussain reckons that Team India captain Rohit Sharma and coach Rahul Dravid tried to alter the Men in Blue’s style of play after their exit from the T20 World Cup last year. He admitted that while the players were able to implement the changes in bilateral series’, they fell back into the defensive trap in the semi-final of the T20 World Cup 2022.

India were eliminated from the competition Down Under after being hammered by 10 wickets by England in the second semi-final in Adelaide. The Englishmen went on to capture the crown by beating Pakistan in the final in Melbourne.

Reflecting on India’s performance, Hussain said on Sky Sports that Rohit and Dravid came in with the mission to change the team’s timid approach. At the end of the day, though, they weren’t able to do so as they did not stick to the philosophy throughout.

Hussain commented, “I had even asked Ravi Shastri, who was the coach of that team (in the last T20 World Cup) and he said ‘we played pretty timid cricket’ with the bat and that’s got to change. Rohit Sharma and Rahul Dravid came to change that, and they did it in bilaterals, they did it against England. Suryakumar Yadav smashed it around Trent Bridge, got a brilliant 115 (117 off 55).

“But then, you’ve got to take it into a game, where you know that if you lose, the sort of criticism you are going to get. The first time they took that into a knockout game, they slid back into their old style of being 66 for 2 in 10 overs,” the former cricketer explained.

Hussain added that there is no dearth of talent in the Indian team, as they have some big names. He, however, questioned the approach of players, especially in knockout clashes. The former England skipper added, “India is still a massive force. You look at their team on paper. You look at the players they could’ve picked. It’s a bit like England. There were a couple of blows like most sides had, like Jasprit Bumrah and Ravindra Jadeja being injured.

“But, when it comes to knockout games, the approach needs to change. There’s talk about younger guns coming through but it’s not the players, but the mindset,” the 54-year-old continued.

Concluding his observations on India, Hussain concluded that the team needs an Eoin Morgan-type character, who not only backs players, but allows them to express themselves. He signed off saying, “They need an Eoin Morgan-type character to go in there and say play careful cricket. 20 overs, go and smash it as much as you can for 20 overs. Play like you play in the IPL and smash it.”

India are currently in New Zealand for a three-match T20I and ODI series, which begins on November 18.