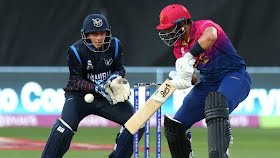 Namibia’s T20 World Cup 2022 campaign began with a historic win against Sri Lanka in the tournament opener. However, it ended in heartbreak as they went down to UAE on Thursday, October 20 in Geelong and failed to qualify for the Super 12. UAE, on the other hand, created history, registering their first-ever win in the T20 World Cup.

UAE batted first after winning the toss in match number 10 of Group A. Muhammad Waseem scored 50 off 41, while skipper Chundangapoyil Rizwan remained unbeaten on 43 off 29. Vriitya Aravind was out for 21 and Alishan Sharafu for 4. Despite the contributions from Waseem and Rizwan, UAE could not progress swiftly enough. It needed a cameo of 25 not out off 14 balls from Basil Hameed to lift UAE to 148 for 3. For Namibia, Ben Shikongo, David Wiese and Ruben Trumpelmann were the wicket-takers.

Needing 149 to confirm their Super 12 spot, Namibia made a disastrous start. They were 69 for 7 in the 13th over. Michael van Lingen (10), Stephan Baard (4), Jan Nicol Loftie-Eaton (1) all perished cheaply insider the powerplay. Nothing much changed after the first six overs as well. Namibia skipper Gerhard Erasmus (16) was bowled by Karthik Meiyappan, JJ Smit was run out for 3, while Jan Frylinck was bowled by Zahoor Khan for 14.

When Khan also sent back Zane Green for 3, the game seemed all but over, but Wiese scored a superb half-century to bring Namibia back in the game. Wiese hit three fours and as many sixes to give UAE a scare. Trumpelmann (25 * off 24) also gave him good support. However, Zahoor and Waseem bowled two terrific overs at the end to seal the game in UAE’s favor.

Reflecting on the historic triumph, UAE captain Rizwan said, “A great moment for UAE cricket. I would like to thank our coach and the management. We had been doing well in patches, but today everything clicked together.”

On Waseem’s bowling at the death, he added, “He used to bowl a lot of death overs in our domestic cricket, and with the dew I backed my instinct of bowling medium pacers. This win is really big for UAE cricket, it can tell the world that we are here!”

Waseem was named Player of the Match for his terrific all-round performance in the match.