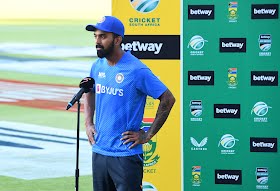 India captain KL Rahul admitted after India beat South Africa 0-3 in the one-day series that the visitors were not good enough and had problems in both the batting and bowling departments. The hosts beat the Blues by four points in the final ODI. Deepak Chahar gave India hope with 54 of 34 balls. In the end, however, he failed to take India over the line. Before the one-day match, India lost the Test series 1-2 despite leading.

Reflecting on the loss of the ODI series, Rahul admitted at the post-game awards show: “It’s clear what’s wrong with us. Don’t shy away from it. Sometimes we have poor shot selection. Even with the ball, we haven’t been hitting the right ball all the time. Zone. Played well in the patch, but didn’t build pressure for a long time.

However, the 29-year-old says he doesn’t blame the kids for their enthusiasm and effort. Rahul pointed out that there are some new names in the team, and in ODI, sometimes they keep repeating the same mistakes.

When asked how the defeat will affect India’s World Cup plans, Rahul said it is now in the early stages of the World Cup journey. He explained: “We could go back and have some tough conversations. Had a great time in South Africa. Was well looked after. We’ve shown a lot of fighting ability.”

Speaking of Sunday’s defeat, the captain praised Chahal’s efforts and said he gave the team real hope. “Deepak gave us a real chance to win the game. A very exciting game, it’s just disappointing that we ended up losing. We gave ourselves a real chance from which we can learn and become better. Okay,” the substitute captain said.

South Africa’s victory was built around Quinton de Kirk’s 130-ball 124 after the hosts were sent into the bat. He was heavily supported by Rassie van der Dussen, who hit 52 of his 59 balls. DeKok was named the player of the game and the series.