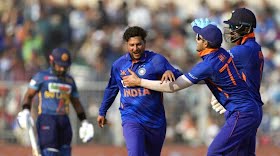 Left-arm spinner Kuldeep Yadav’s case is a unique one in Indian cricket. He might come up with exceptional performances, but might still get dropped for the next match. This has already happened on a couple of occasions, none more prominently than in Bangladesh, where he picked up eight wickets and scored a crucial 40 in the first Test. He was named Player of the Match in what was his Test comeback, but was not picked in the playing XI for the second Test of the series.

In the ongoing ODI series against Sri Lanka, Kuldeep was not selected in the playing XI for the first ODI in Guwahati. He only got his chance in Kolkata because Yuzvendra Chahal could not recover from an injury he picked up during the opening game of the series .

The 28-year-old grabbed his chance once again, claiming 3/51. He dismissed Kusal Mendis, Dasun Shanaka and Kusal Mendis as Sri Lanka were bundled out for 215 in 39.4 overs after winning the toss and batting first. Kuldeep was named Player of the Match for his three-wicket haul.

Reflecting on his performance in the post-match presentation ceremony, he commented, “Since the last one year, I have been trying to back my strength and not think much. Whenever I get my chance, I just think about performing well. I am enjoying my bowling a lot. The team combination matters, so I just try to give my best whenever I get my chance.”

Kuldeep revealed that he bowls faster in the Indian Premier League (IPL) and T20Is and did the same on Thursday. He elaborated, “I bowl faster in the IPL and T20Is also to give the batter one run. So, I just did that here also.”

The left-arm spinner has had his issues with fitness recently, but stated that he has been working hard on the same at the NCA (National Cricket Academy), the results of which are showing. Kuldeep concluded, “I have worked on my batting a lot of late. Same with the fitness. Whenever I get time, I go to the NCA. So, thanks to the trainers there. That’s one thing I have tried to do in the last one year. Earlier, I wasn’t much into it.”

Apart from Kuldeep, pacer Mohammed Siraj also impressed with figures of 3/30. In the chase of 216, KL Rahul scored an unbeaten 64, while Hardik Pandya contributed an important 36.