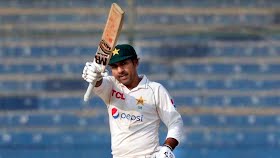 Pakistan overcame a poor start to end the opening day’s play of the first Test against New Zealand in Karachi in command. Batting first after winning the toss, they found themselves in big trouble at 48/3. Abdullah Shafique (7) and Shan Masood ( 3) were stumped, while Imam-ul-Haq gave his wicket away after reaching 24. Saud Shakeel also got a start before he outside-edged Tim Southee and was caught at gully

Babar Azam was then joined by comeback man Sarfaraz Ahmed, who last played Test cricket for Pakistan in January 2019. Babar and Sarfaraz featured in a brilliant stand, adding an entering 196 for the fifth wicket. fell 14 short of what could have been memorable comeback ton. He was caught at slip off Ajaz Patel and walked back a disappointed man.

While Sarfaraz could not get to three figures, his alliance with Babar ensured that Pakistan finished Day 1 on a high at 317/5. At a press conference following the end of the first day’s play in Karachi, Sarfaraz reflected on his unexpected Test return and It also opened up the frustration of having to wait on the sidelines.

Speaking about his emotions of going into bat for Pakistan in Test cricket for the first time since January 2019, the 35-year-old said, “You asked me about my feelings when I walked out to bat before lunch. If someone would have checked my heartbeat, the meter would have exploded.

“Heartbeat was very fast and it felt like my debut. I was playing after a long time and it was also a crunch situation. During lunch, people who have played with me [in the past] asked me to relax. I told them about my heartbeat which was very fast.”

Praising Babar for giving him confidence when he went out to bat, the keeper-batter added, “When I walked back in, Babar gave me a lot of confidence. As a senior player, the way he carried me along – I needed a bit of confidence – [felt good]When you play a match on comeback, it feels like the first time. Babar gave me confidence and Allah takes care of me.”

While out of the Test team, Sarfaraz kept piling up the runs in domestic cricket in Pakistan. He admitted that the last few years were tough as he could not break into the playing XI in red-ball cricket even as the odd opportunity came in white -ball games.

On how he fought through trying times, the former captain concluded, “Whenever a player plays, the effort is in order to play for Pakistan. But the last four years were a bit tough but I backed myself. I was around good people and my aim was always to play cricket and not pay attention to other things. Allah gave me the chance I was waiting for and I tried to make the most of it. Hoping for more such opportunities.”