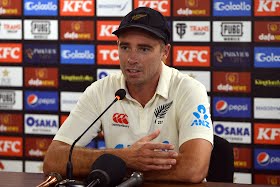 New Zealand captain Tim Southee has expressed disappointment at the two-match Test series against Pakistan ending in a draw. Bad light played a part in both Tests as the hosts escaped with a draw, leaving the Kiwis a bit frustrated. New Zealand needed 77 runs for victory with nine wickets in hand when the game was called off. In the second Test, the Kiwis were only one wicket away from victory, despite Sarfaraz Ahmed’s brilliant ton. However, Pakistan’s last-wicket pair of Naseem Shah and Abrar Ahmed hung on to secure a draw for the hosts.

Set a target of 319, Pakistan were 304/9 after 90 overs when the Test ended in tantalizing fashion. The hosts began the day having lost two wickets overnight without any runs on the board. Sarfaraz Ahmed (118 off 176) continued his dream comeback and gave the team hopes of an unexpected victory.

Ahmed, was however, dismissed in the 87th over as New Zealand’s hopes of victory were rekindled. The last-wicket pair managed to ensure the Kiwis did not walk away with a famous win. Reflecting on the drawn series, New Zealand skipper Southee said, “You play to win Test matches and we got ourselves in, probably, positions. to win both of them. It was pretty tough going but the guys toiled away and we were one ball away from a series victory.

“So yeah, disappointing to walk away [with a drawn series] and I’m sure Pakistan are the same. You walk away, you toil away for 10 days and a drawn series. A lot of good cricket was played in and among those 10 days,” he added at the post-match conference.

The Kiwi fast bowler also opened up about the pitches in Pakistan, which have been a matter of debate in cricketing circles. While there was been some criticism of the surfaces, Southee was not too harsh. He responded, “We felt the surfaces was still a pretty good surface if you wanted to just bat. Tough if you wanted to score runs. So it was a bit of a balancing act to try and get the right amount of overs left and the right amount of runs. And I guess to get a little dip at them [2.5 overs] last night and get them two down, that was a great start.”

In the wake of Pakistan escaping with a draw after being nine down, the obvious question of New Zealand’s declaration late on Day 4 came to the fore. Although the Kiwis did claim a couple of wickets, they got to bowl only 2.5 overs before the close of play. Revisiting the decision, Southee said, “I guess you always look back and there’s ways you could improve and you could get better with hindsight. But that was a decision we made at the time.

“The guys that were batting felt that it wasn’t easy to just go out and hit the ball. So it was one of those ones that you had to weigh up. Last night we declared and made the most of the three overs we had ,” he explained.

The drawn match means Pakistan have failed to win three home Test series in a row. They went down 0-1 to Australia, before being embarrassed 0-3 by England’s ‘bazball’ squad.