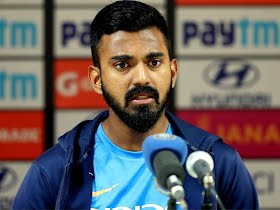 Team India bowling coach Paras Mhambrey praised stand-in captain KL Rahul after Day 4 of the Chattogram Test against Bangladesh, stating that he rotated the bowlers very well and kept the pressure on the opposition.

India continued their domination in the first Test of the series against Bangladesh on Saturday, December 17. Chasing a massive target of 513, Bangladesh ended the day on 272/6. They need a further 241 runs for victory on Day 5, but have only four wickets left. Bangladesh debut Zakir Hasan scored 100, while fellow opener Najmul Hossain Shanto contributed 67. The duo added 124 runs for the opening wicket.

Left-arm spinner Axar Patel, however, led India’s fightback, claiming 3/50 in 27 overs. Umesh Yadav, Ravichandran Ashwin and Kuldeep Yadav also chipped in with one wicket each. Speaking after the end of the day’s play, Mhambrey hailed Rahul for his leadership. He said, “The captain’s instincts are also important and we need to back those decisions. Credit needs to go to KL Rahul, he rotated the bowlers very well. He got the fast bowlers in short bursts when the ball was reversing, so that was good as well.

“When he realized that fast bowlers are having longer spells, he got the spinners in. And the new ball we took, we got a couple of wickets after that as well. So I think the credit goes to KL, he has rotated he bowlers very well,” he added.

Apart from Rahul, the former India pacer also praised Kuldeep for making a successful comeback to Test cricket after nearly two years. He added, “He’s put in a lot of work, people were discussing the speeds he was bowling at, when people felt he was a bit slower in the air. But credit goes to him, he’s worked on that. The changes that he’s made, he’s worked on the angles of his run up, that allows him to bowl quicker in the air.”

Pointing out that the left-arm spinner has suffered due to injuries in the last couple of years, he asserted that he was happy to see the cricketer doing well now. Mhambrey commented, “Obviously, very happy to see him do well for the country . He’s been unfortunate in the last few years. He missed out with a knee injury, had a surgery, came in the squad, got hit in the nets. In that sense, he’s been very unlucky. So very happy to see him perform well. and come up with the best match figures.”

Bangladesh will resume Day 5 with skipper Shakib Al Hasan batting on 4 and Mehidy Hasan Miraz on 9.