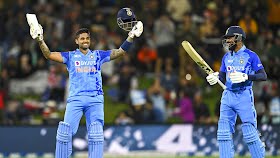 Team India batter Suryakumar Yadav has shared his first reaction after being named vice-captain of the Indian team for the upcoming T20I series against Sri Lanka. India will be playing three T20Is against Sri Lanka from January 3 to 7. With KL Rahul and Rishabh Pant not part of the T20I squad, it’s Suryakumar who has been elevated to the role of vice-captain for the series.

The right-handed batter is currently representing Mumbai in the Ranji Trophy domestic competition. Speaking at the sidelines of the match against Saurashtra, SKY, who top-scored for his side in the first inning with 95, said that the elevation to vice-captaincy is nothing short of a dream. He stated, “It (vice-captaincy) wasn’t expected, but the way the past year has been for me, I can say that it’s like a reward for me. I’m feeling very good about it, and I’m really looking forward to it.”

The 360-degree batter revealed that it was his father who informed him of the big development. SKY added, “My father forwarded the (team) to me, because he’s always on social media. Then, we spoke to each other. He also sent me a small message: ‘Not to take any pressure and enjoy your batting.’”

Admitting that the news took time to sink in, Suryakumar shared his emotions and commented, “I closed my eyes and asked myself, ‘Is this a dream?’ Of course, it still feels like a dream. My hard work of several years ( has paid off). The seeds that I’ve sown, that tree has finally grown, and I’m enjoying its fruits. So, I’m really happy with the way things are growing. I want to ensure that this patch keeps getting longer. The more I’m in this space, the better.”

While agreeing that being named vice-captain is a great honor, Suryakumar played down any talk of extra pressure, stating that the sense of responsibility will always be there. He elaborated, “Since the time I’ve been playing cricket for India, there has always been responsibility and pressure on me. But at the same time, I’ve been saying that I’m just enjoying my game in the middle. I don’t carry any baggage. I don’t think too much. the thinking only in the hotel and in the nets. When it comes to the match, I just look to enjoy my game, and express myself.”