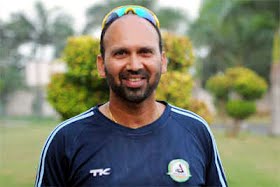 India’s bowling coach Paras Mhambrey tried to play down the Indian players’ backlash to the DRS decision, which favoured Dean Elgar on Day 3 of the Cape Town Test against South Africa. According to Mhambrey, players sometimes say things when they get emotional, but it’s not a big deal.

Indian off-hand Ravichandran Ashwin trapped Elgar lbw on the 22nd in their final match on Thursday. However, Captain Proteas used DRS and overturned the decision. A dismayed Indian camp made shocking comments following the decision, suggesting the host broadcaster was favouring the home team.

Peaking at the end of the day, India’s bowling coaches moved more into damage control. Mhambrey explained: “Look, everybody here is doing their best, and sometimes in moments like these people do say something…it’s a game. I think if we move forward, Let’s not go further, that’s fair. It just happened. [When] Everyone is trying their best, and sometimes emotions do play a role, but let’s sit back and think about how we’re going to do it tomorrow. “

“You should find a better way to win SuperSport” when he heard Virat Kohli taunt on the stump microphone: “Definitely have a fair game at DRS”. KL Rahul commented: “The whole country is playing against 11 people”

The former India striker also shared his thoughts on Kohli’s playing style, which has been divided. He said: “He’s lively and that’s how he likes to play cricket. His energy rubs into other people and that’s what you want from your captain.”

Regarding the Indian team, he added: “This is an experienced team. It has nothing to do with what kind of bowling or batting unit you have, after looking at the wicket, the decision will be made accordingly. You have to be prepared to bowl first or Defend the small goals. It’s not about day five, it’s about day one, you make a decision, and then you support that decision.”