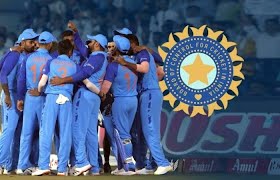 After a thrashing defeat in the T-20 World Cup semi-finals against England. BCCI is right onto the move from the beginning of the year for the upcoming ODI world cup which is going to be hosted by India. BCCI has scheduled a meeting on 1st January 2023, with Head Coach Rahul Dravid, Captain Rohit Sharma, NCA Chairman VVS Laxman, ex chief selector Chetan Sharma, and Board President Roger Binny. During the meeting they have shortlisted 20 players for the approaching ODI World Cup.

In 2023, India will play 55 ODI’s starting with an upcoming on home-soil ODI series against The Lions.

After the meeting BCCI announced key takeaways from the meeting through an official statement.

“The roadmap for the upcoming ODI World Cup in India was discussed at the meeting, along with issues related to player availability and workload management,” the BCCI had said in an official statement.