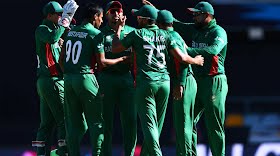 Bangladesh beat Zimbabwe by three runs in match number 28 of the ICC Men’s T20 World Cup 2022 at the The Gabba in Brisbane on Sunday, October 30. Bangladesh batted first after winning the toss and posted 150 for 7. Opener Najmul Hossain Shanto top-scored with 71 off 55 balls. However, they were also aided by a poor fielding effort by Zimbabwe. In response, Zimbabwe were held to 147 for 8 despite Sean Williams’ 64 off 42 balls.

Bangladesh lost Soumya Sarkar (0) and Litton Das (14) cheaply to Blessing Muzarabani inside the powerplay. Shanto and Shakib Al Hasan then added 54 runs for the third wicket before Shakib (23) fell to Williams courtesy a good catch by Muzarabani. Shanto batted with patience to reach a half-century, but opened his arms after that. He hit seven fours and six in his innings before perishing to Sikandar Raza.

Afif Hossain scored a handy 29 off 19 to lift Bangladesh to the 150 mark even as Mosaddek Hossain (7) and Nurul Hasan (1) perished cheaply, looking for quick runs. For Zimbabwe, Muzarabani and Richard Ngarava picked up two wickets each, while Raza and Williams claimed one each.

Zimbabwe got off to a disastrous start in response, crumbling to 35 for 4. Wesley Madhevere (4) and Craig Ervine (8) were both taken out by Taskin Ahmed. Mustafizur Rahman then claimed two wickets in the last over of the powerplay. Milton Shumba (8) chipped a simple catch, while Raza was caught off a miscued pull.

Williams and Regis Chakabva added 34 for the fifth wicket before Taskin Ahmed returned to dismiss the latter for 15. Williams found another able partner in Ryan Burl (27*). The duo added 63 to bring Zimbabwe back in the game. A few big hits brought the equation down 26 off 12 balls. However, a brilliant direct hit from Shakib ended Williams’ knock and Zimbabwe’s hopes.

There was some drama at the end as Nurul Hasan’s stumping off Muzarabani was declared a no ball since he had gathered the ball in front of the stumps. However, with four needed off the free hit delivery, Muzarabani failed to connect against Mosaddek.

Speaking after the tense win, Player of the Match Taskin Ahmed admitted “We were nervous in the middle after that last ball (no-ball). I’ve seen something like that for the first time. (On own performance) Just focusing on improving and giving my best. Back home we play on slow wickets, and here we get early movement and help off the track as well. Got a good bunch of fast bowling group, we support each other and working hard to improve ourselves. We get great support from our bowling coach (Allan Donald) and all the other support staff.”