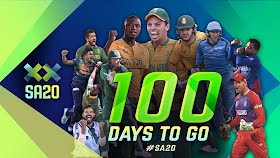 The first edition of South Africa’s most awaited franchise Twenty20 League is set to commence on the 10th of January 2023 with 6 teams participating in the competition.

A total of 33 matches will be played at 6 different venues namely Pretoria, Johannesburg, Durban, Gqeberha, Cape Town, and Paarl.

A total of R125 million was spent at the auction that took place in Cape Town on Monday.

International stars including the likes of Jason Roy, Jos Buttler, Liam Livingstone, Rashid Khan and Odean Smith will participate in the competition.

He is one of the most promising young talents in South Africa. After delivering phenomenal performances at the Under 19 World Cup, he participated in various leagues across the world. Dewald Brevis was brilliant in the recently concluded Caribbean Premier League as well as the IPL.

Brewis is credited as Junior ABD by his fans, based on his batting stance and hitting prowess. Mumbai Indians were quick to notice his talent and signed him up for their IPL campaign. It hasn’t come as a surprise that they have retained Brewis for their South Africa T20 franchise as well. Brewis is definitely a player to look out for in South Africa T20 League 2023.

Buttler needs no introduction to the cricket fraternity. He is one of the best white ball players in this generation. He played a vital role in England’s campaign at the ICC Men’s T20 World Cup 2022.

Having scored 225 runs in the World Cup at an average of 45.00 and a strike rate of 144.23, Buttler is surely in the form of his life. He has done great justice to the captaincy role that he was given prior to the World Cup as well .

Buttler is a world class performer and it wouldn’t be a surprise if he is the overall leading run scorer in the 1st edition of SA T20.

Aiden Markram is currently ranked 5th in the ICC Men’s T20 rankings for batters. He has been very consistent for South Africa in this format.

Markram possesses a wide range of shots both against fast bowlers as well as spinners. His record at home is a testimonial of his ability on South African pitches.

Markram can not only provide impetus into the innings when required, but he can also bring in stability when the team is in trouble. He is one of the batters to look out for in the upcoming tournament.

Harry Brook is in the form of his life. Based on his recent performances, he has become an disposable part of the England T20 squad.

Brook is currently in Pakistan to play the Test Series. He has already smashed 2 centuries in the series and there is no stopping him in any format of the game.

He is good both at the front foot and the back foot. Harry Brook holds an impressive strike rate of 148.38 in T20 cricket. He has also hit a century in the format and in all likelihood, he can become the top run scorer for Joburg Super Kings in the upcoming competition.

Will Jacks is an experienced campaigner who takes part in various T20 leagues across the world. He usually opens the batting but is comfortable at any position in the batting order.

He performed superbly in The Hundred 2022, which is where his top score of 108* was materialized. Based on his current form and experience, Will Jacks is a player to look out for in South Africa T20 League 2023.