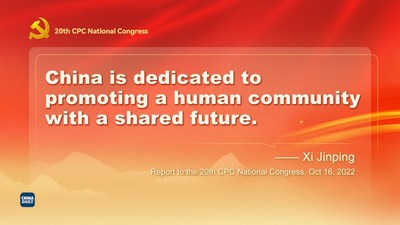 Xi Jinping delivered a report to the 20th National Congress of the Communist Party of China on Sunday.

The following are some highlights from the report:

The five years since the 19th National Congress of the CPC have been truly momentous and extraordinary.

The Party Central Committee has pursued a strategy of national rejuvenation amid global changes of a magnitude not seen in a century, with major strategic plans made for advancing the cause of the Party and the country.

Historic achievements over past decade

The CPC has taken China on a new journey toward building a modern socialist country in all respects.

Under the leadership of the Party Central Committee, the entire Party, the military, and the Chinese people have been brought together to carry out a great struggle with many new features of the times.

It is the solemn historic responsibility of today’s Chinese Communists to continue opening new chapters in adapting Marxism to the Chinese context and the needs of the times.

Since the 18th CPC National Congress, with the courage to make theoretical explorations and innovations, the CPC has, from an entirely new perspective, deepened its understanding of the laws that underlie governance by a communist party, the development of socialism, and the evolution of human society.

From this day forward, the central task of the CPC will be to lead the Chinese people of all ethnic groups in a concerted effort to realize the Second Centenary Goal of building China into a great modern socialist country in all respects and to advance the rejuvenation of the Chinese nation on all fronts through a Chinese path to modernization.

The CPC aims to basically realize socialist modernization by 2035, and build China into a great modern socialist …