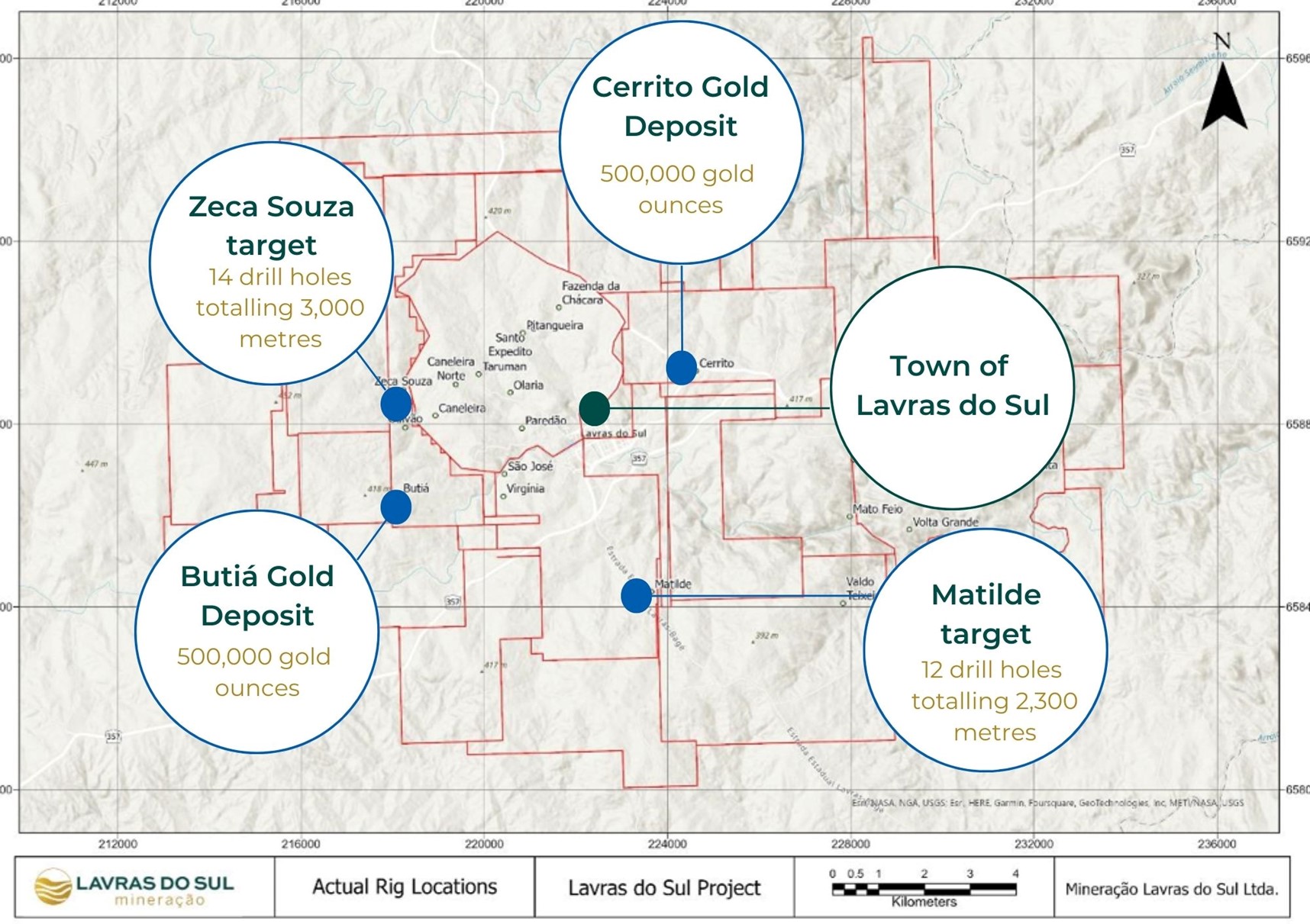 “Long continuous zones of gold mineralization both laterally and to a vertical depth of more than 480 metres where it is still open, indicate a very strong and large gold system at Matilde.

“Our next steps will be to follow up on these results to test for extensions to gold mineralization along strike to the west and to the northeast where we are drilling at Matilde Extension. Work will also focus on better defining the nature of the structures that host the gold, alteration styles associated with mineralization, and their relationship to the large 3-kilometre-long gold in soil anomaly that is centered on the Matilde target.”

Located approximately 4.5 kilometres south of the town of Lavras do Sul (Figure 1), Matilde is one of six priority drilling targets. There are 23 known gold occurrences at LDS. Other drilling targets include Matilde Extension, Caneleira, Vila Marieta, Mato Feio, and Zeca Souza.

Important gold mineralization occurs in 91% or 30 out of 33 holes totalling 9,847 metres drilled at Matilde to date. This news release discloses new assay results from 26 drillholes totalling 8,349 metres. The results from the other seven historical drillholes are also discussed here for completeness. Highlights are as follows:

In addition to the drilling program, Renaud Geological Consulting of London, Ontario, completed petrographic studies on samples from the Matilde target (sample 20MT-002) (Figures 8 and 9).

The study concludes that “Matilde is a highly altered intrusive rock with primary textures dominantly replaced by hydrothermal alteration. The rock has undergone multiple hydrothermal events dominated by poikilitic growth of hydrothermal quartz and feldspar.

“The rock is dominated by a distinctive green-yellow colour attributed to a groundmass of phengitic micas, chlorite, and albite. The rock appears brecciated and sealed by extremely fine-grained phengitic-paragonitic muscovite, albite, iron-chlorite, and manganese-iron carbonate. Sulphide minerals include pyrite, arsenian pyrite, arsenopyrite, marcasite, silver-bearing tetrahedrite, and electrum. The rock is cross-cut by late-stage anastomosing veinlets of quartz-carbonate.”

These conclusions add to the growing evidence that the gold-bearing fluids that formed gold at Matilde are of a magmatic hydrothermal origin, and that this is primarily a large intrusive hosted gold system with epithermal and porphyry characteristics.

The drill program tested a portion of a coincident 3.0 kilometre long gold in soil anomaly centered on an east-west trending magnetic-low anomaly (Figure 2) that is interpreted to be a major gold-hosting structure. Drilling defined a gold system hosted within an east-west structural corridor in hydrothermally altered granodiorite. Gold mineralization begins at surface and has been traced over a strike length of at least 250 metres and to a minimum vertical depth of 483 metres. The deposit is open to expansion along strike and at depth.

In a general sense, the mineralization consists of broad zones of moderate-grade gold accentuated by narrower intervals of higher-grade. In addition, bonanza gold values are usually associated with visible gold adjacent to interpreted lamprophyre dykes and late-stage milky quartz veins.

However, there is evidence that a potassic style of alteration is beginning to develop at depth as evidenced by pink potassium feldspar at a drill core depth of 418 metres in 22MT-034 (see figure 7). This is important, as higher gold and copper grades typically exist in the potassic zones of porphyry systems.

These two holes intercepted a major east-west gold-bearing structural corridor over a 50-metre strike length demonstrating that gold mineralization begins at surface and shows good continuity over broad intervals and across a wide structural corridor. Highlights from this previous drilling includes:

The follow-up program focused on extending the strike extension of the east-west mineralized corridor and the down dip extension. The program has been successful on both fronts.

Matilde remains open along strike and at depth. Highlights of drilling are as follows:

In addition to the east-west structural corridor, there may be a northeast trending structure beginning to develop.

Holes 21MT-007 and 21MT-009A appear to have intersected mineralization striking in a northeast-southwest direction parallel to a northeast-southwest magnetic low anomaly in the aeromagnetic data. This structural trend continues 675 metres towards the northeast where the Matilde Extension target is being drill tested.

The main intercepts near Matilde that tested this northeast trending structure include:

These drilling results are being incorporated into the geological database for further interpretation and analysis. The 16,000-metre drilling program is on-going and consists of two drills. The program will continue to test for extensions of gold mineralization to the west/northwest and east/northeast at Matilde. The down dip extensions of mineralization will also be further investigated.

A drill was also recently mobilized to Zeca Souza to follow up on positive results disclosed earlier this year.

An on-going regional soil survey is underway, and results will be integrated with the regional aeromagnetic drone survey that was completed in the summer.

Michael Durose, Lavras Gold's President and CEO, is a qualified person as defined by NI 43-101. He has reviewed and approved the scientific and technical information contained in this release.

Drill core is logged and sampled in a secure facility located in Lavras do Sul, Rio Grande do Sul State, Brazil. Drill core samples for gold assay are cut in half using a diamond saw and submitted to ALS Laboratories Inc. in Goiania, Goiás State, Brazil for preparation by crushing to 70% passing 2.0 mm, riffle splitting to obtain 500 g aliquots, and pulverizing to 85% passing 75 microns.

Pulps are shipped to ALS Laboratories in Lima, Peru and analyzed by a 30 g fire assay and AAS finish. For assays above 10 ppm gold, a cut of the original pulp was re-assayed with a gravimetric finish.

Certified standards, non-certified blanks and field duplicates are inserted into the sample stream at regular intervals, so that QA/QC accounted for about 10% of the total samples. Results are routinely evaluated for accuracy, precision, and contamination.

Lavras Gold (TSXV:LGC) is a Canadian exploration company focused on realizing the potential of a multi-million-ounce gold district in southern Brazil. Its Lavras do Sul Project is located in Rio Grande do Sul State and is primarily an intrusive hosted gold system of possible alkaline affinity. More than 23 gold prospects centred on historic gold workings have been identified on the property, which spans more than 22,000 hectares.

FORWARD-LOOKING INFORMATION
This news release contains certain “forward-looking information” within the meaning of applicable securities laws. Forward-looking information is frequently characterized by words such as “plan”, “expect”, “project”, “intend”, “believe”, “anticipate”, “estimate”, “may”, “will”, “would”, “potential”, “proposed” and other similar words, or statements that certain events or conditions “may” or “will” occur. These statements, including those on planned exploration activities and goals, are only objectives and predictions. 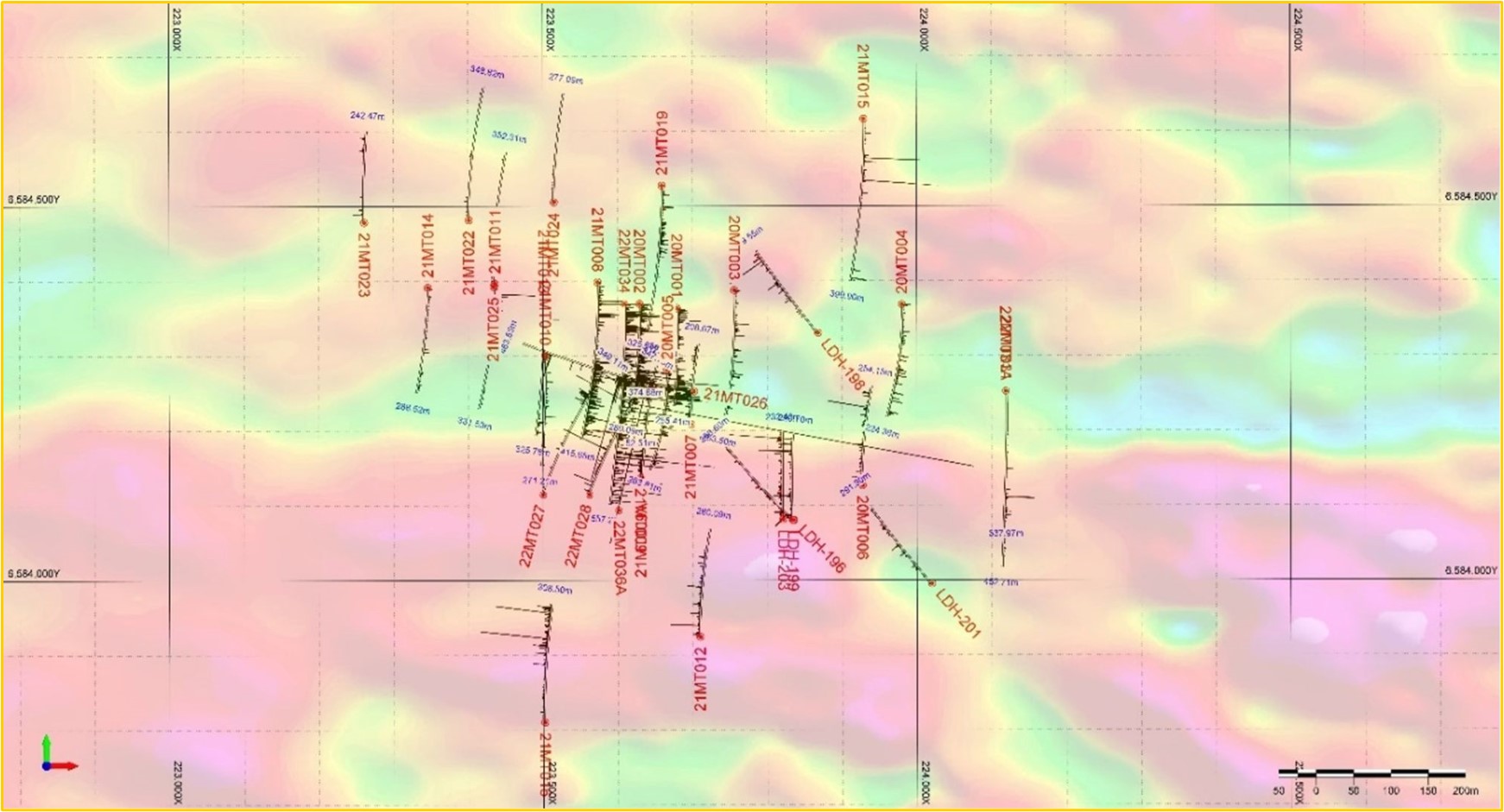 FIGURE 3
Cross section looking east of drill hole 22MT-034 showing multiple zones of gold mineralization at Matilde that begin at surface and end at 552.00 metres, where it remains open. 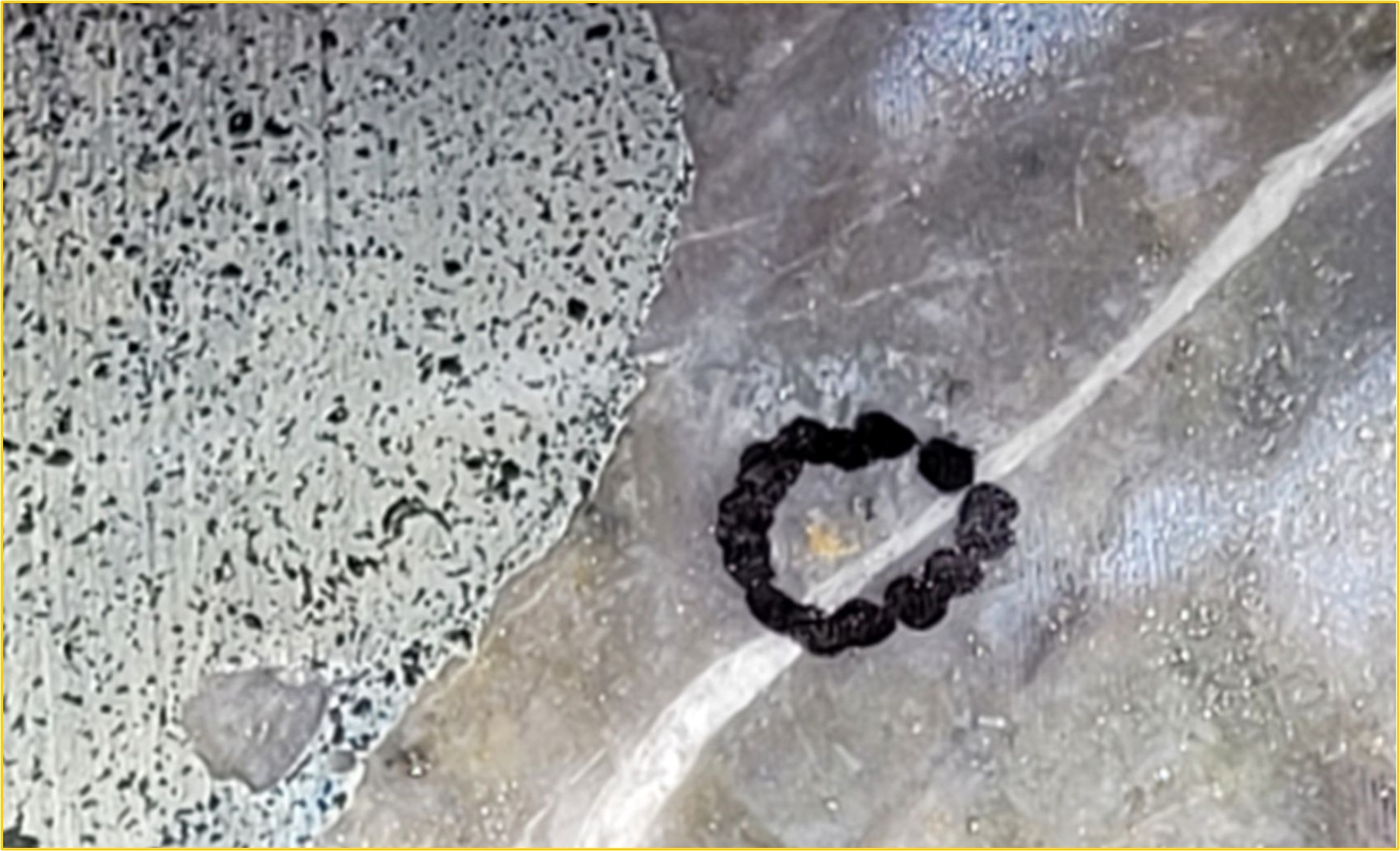 FIGURE 6
Drillhole 22MT-034 returned 1.00 metre grading 2.84 g/t gold from 407.00 metres. Visible gold specks within aphanitic glassy matrix of silica and greenish-yellow sericite (phengite) adjacent to an interpreted lamprophyre dyke (top of picture). The lamprophyre dyke appears silicified as evidenced by millimetre-scale cross-cutting quartz veinlets and appears to have absorbed numerous subangular glassy quartz fragments (top of picture). Alternatively, this is a felsic dyke. The field of view is estimated to be 6 centimetres. This hole was drilled to 557.38 metres representing a vertical depth of 482.69 metres. 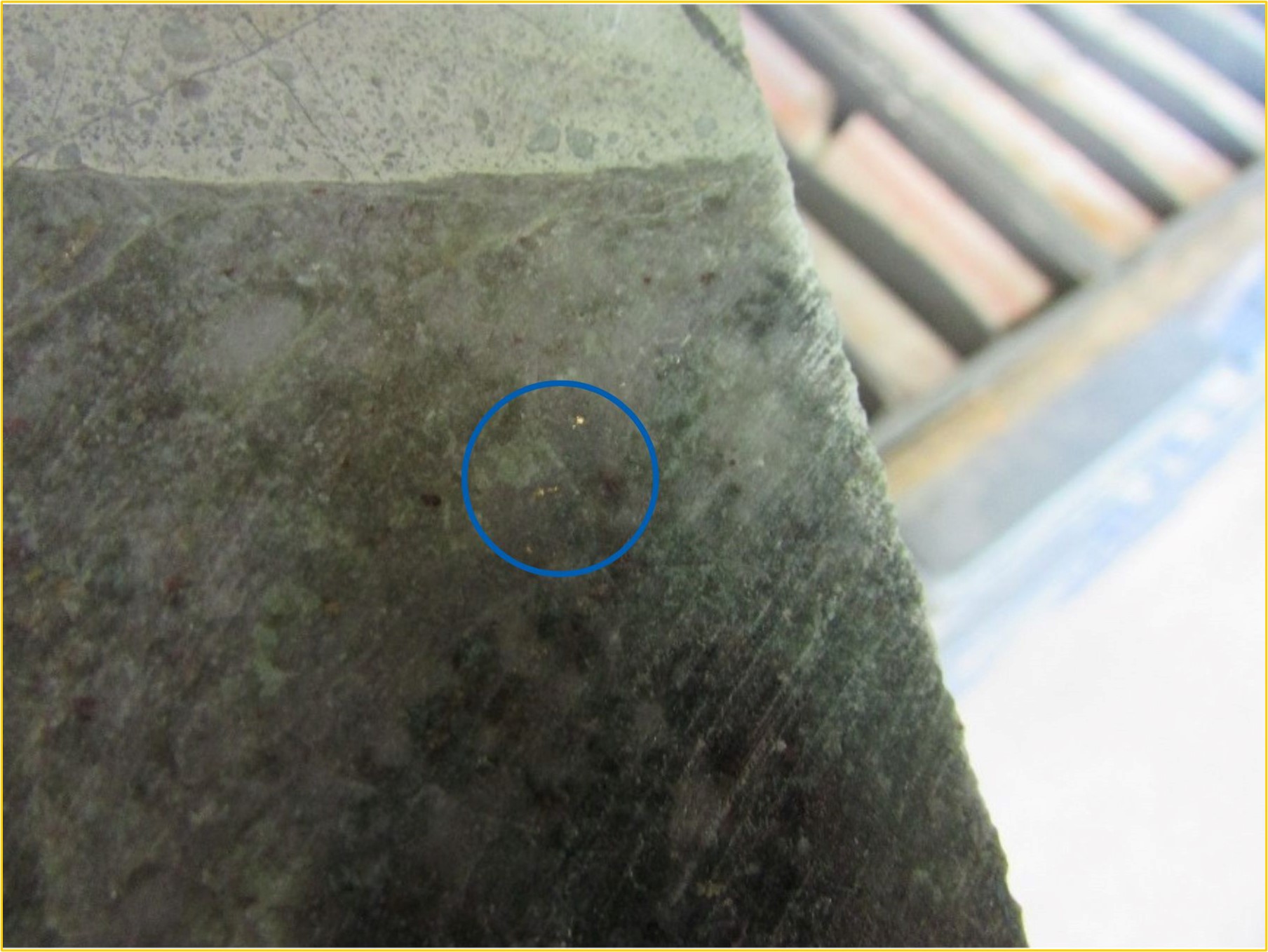 FIGURE 7
Drillhole 22MT-034 returned 0.66 metres grading 13.10 g/t gold at 419.34 metres. Visible gold specks within aphanitic matrix of milky quartz. Milky quartz appears to be a late-stage event as evidenced by comb textures, and cross-cutting relationships with glassy-gray aphanitic quartz veinlets (right hand side) and remnant hydrothermally altered granodiorite. The field of view is estimated to be 10 centimetres. This hole was drilled to 557.38 metres, representing a vertical depth of 482.69 metres. 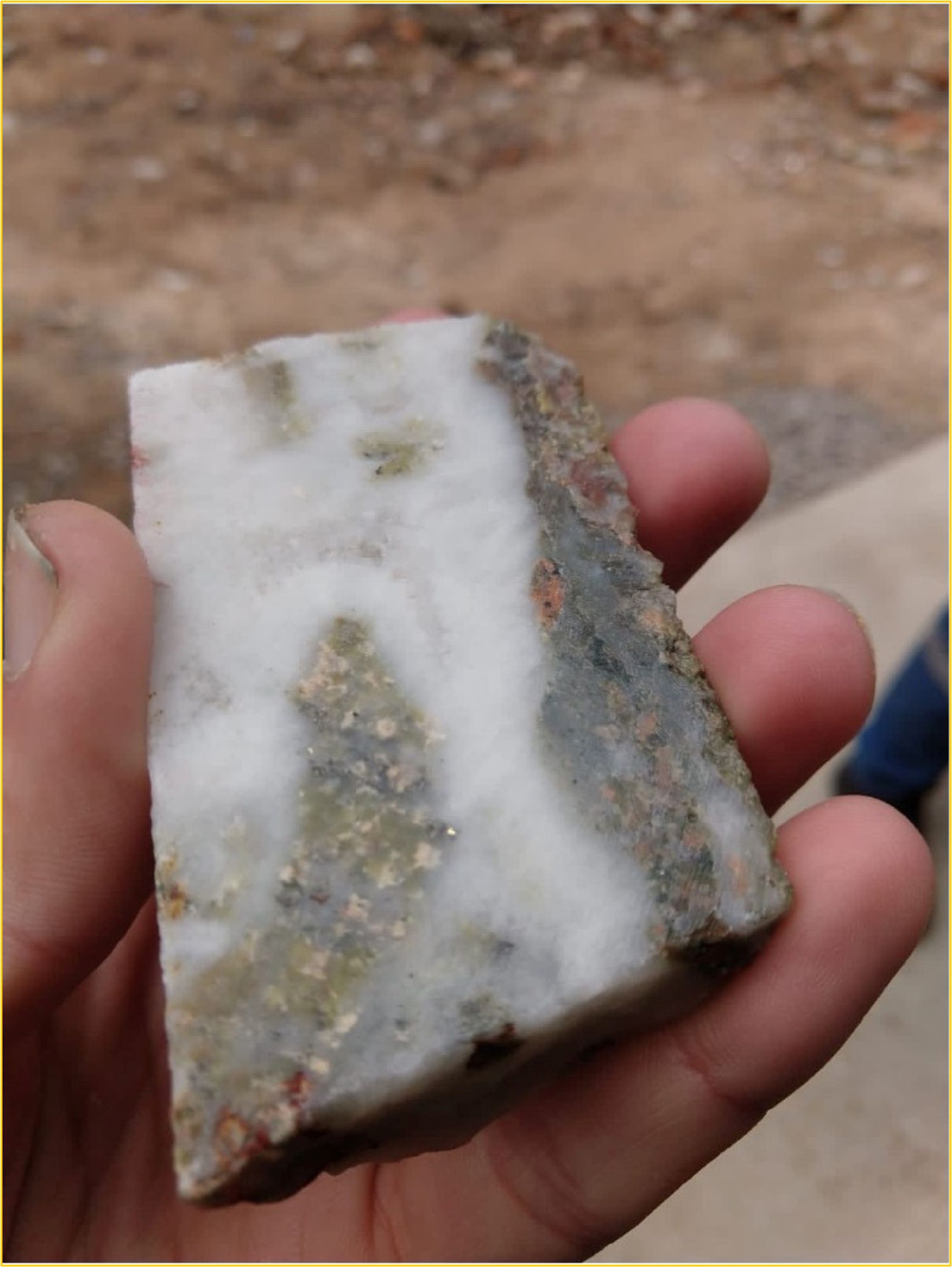 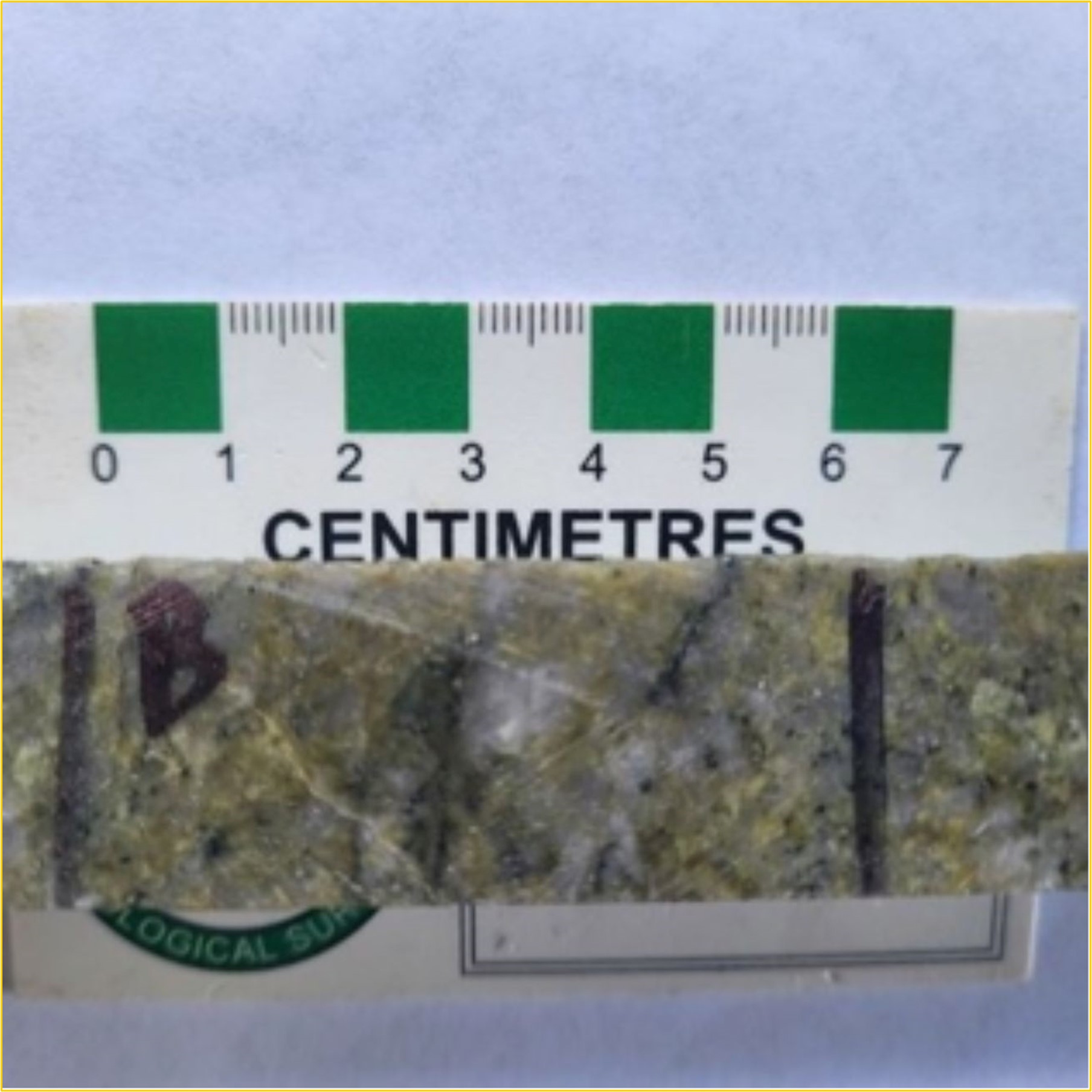 FIGURE 9
Drill core 20MT-002 showing a grain of pyrite and arsenian pyrite (dark yellow), chalcopyrite (red), and tetrahedrite (light yellow). These sulphides are within a groundmass of fine-grained phengitic muscovite, chlorite, and albite. The field of view is 2 millimetres. 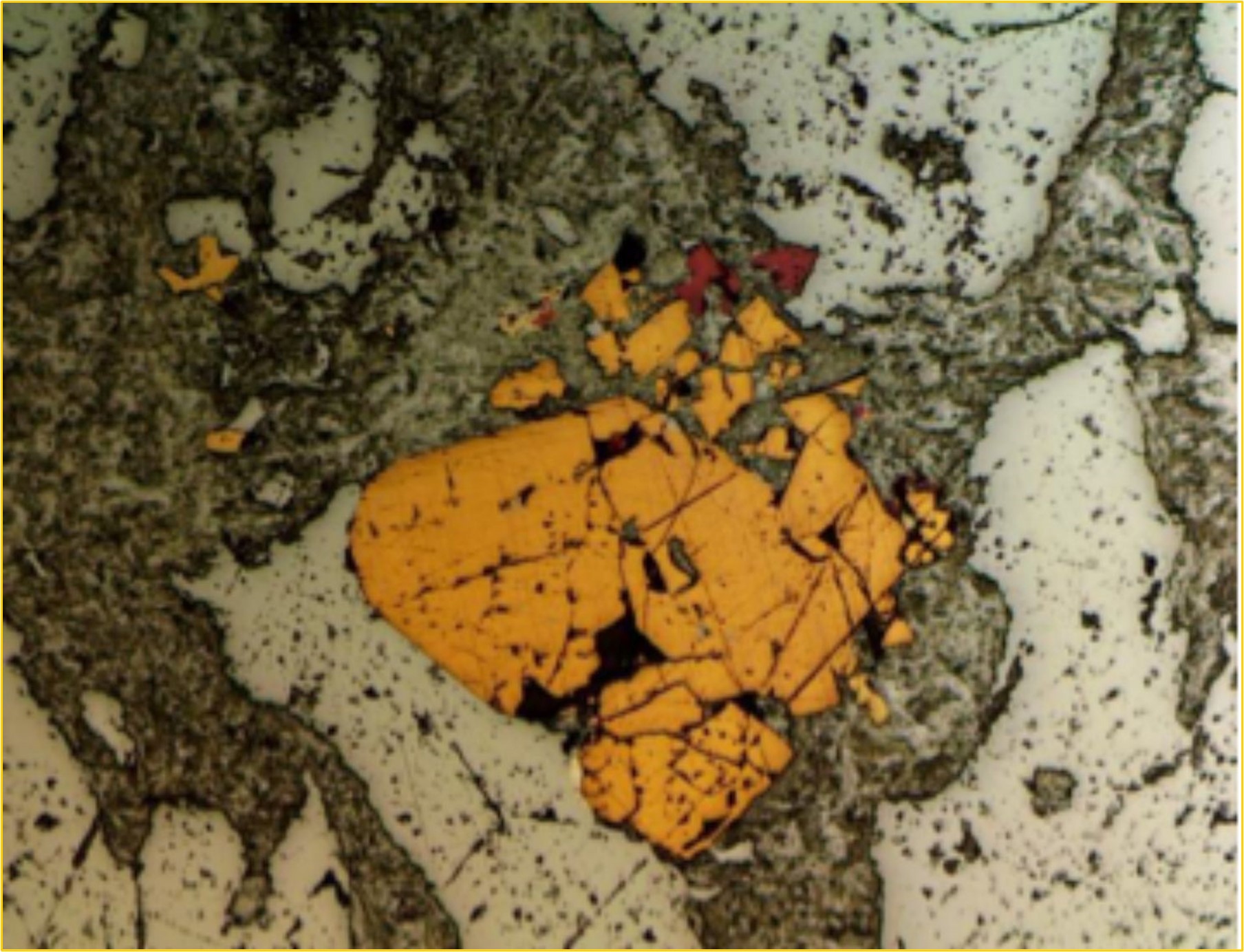