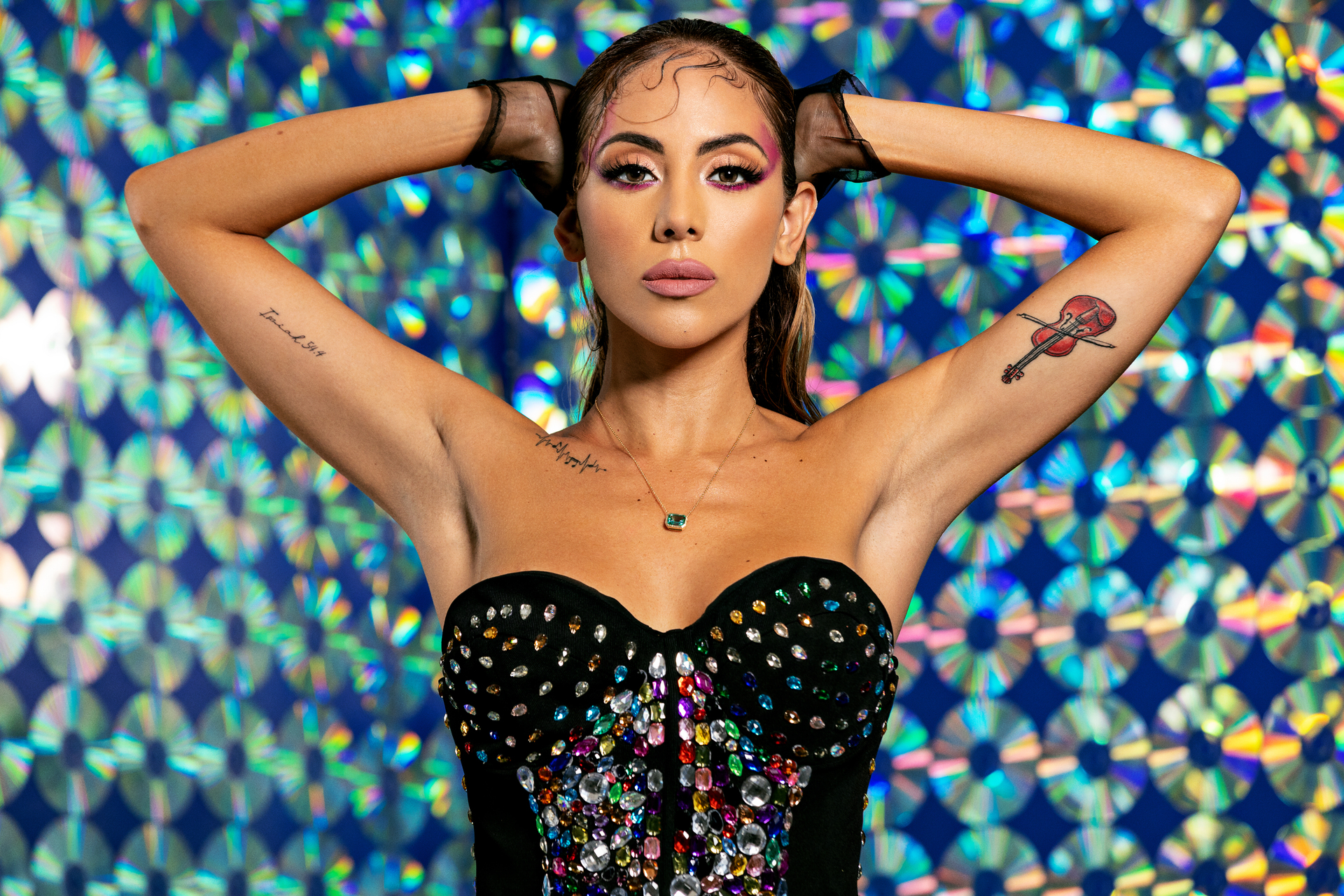 Esther Annaya Do it all. She is a talented DJ, singer, songwriter, producer and violinist. Esther recently earned a monumental DJ residency at Resorts World Las Vegas, the newest luxury hotel in Las Vegas. Esther also broke the barrier and became the first female DJ/violinist duo in Colombia.

As a versatile DJ, Esther has opened for many award-winning artists such as Zedd and DJ Snake. As a violinist, she also performed with world-renowned musicians including Kanye West and Rihanna at the 2011 NBA All-Star Game. In 2018, she opened the Marumao Tour in 21 cities. A year later, she performed in her home country for the first time since immigrating, and performed for Mexican singer and songwriter Ana Gabriel. Recently, Esther participated in the 2021 Monitor Latino Music Awards with Lunay and Ricardo Montaner.

Esther Anaya’s versatility sets her apart. She is a crossover artist who has worked with musicians in the Latin and EDM industries. In early January, she will release her own new single “Lost Paradise”, which she wrote and produced. It is recorded in Spanish (Spanish and English) and symbolizes her wish to become a cultural bridge.

Wherever she goes, Esther will embrace her Colombian ancestry. She and her family moved to the United States in 2002 to seek political asylum.

Esther described that when I moved to North America, “the only things I brought were my violin and luggage.”

As a member of a musical family, her father is a singer and composer, and everyone can play an instrument. Since the age of 7, Esther has received classical violin and vocal training.

“Music growth is a way to reunite my family,” Esther said.

Off the stage, Esther Anaya runs a non-profit organization called ASAF Angels. Her organization provides musical instruments and high-quality music education to disadvantaged communities in Colombia, Mexico, and the United States. She is passionate about giving back and inspiring young people’s love for music.

Esther reflected: “I hope that my legacy is music that can really inspire and highlight the good values ​​of people and generations. I want to make exciting music, feel beautiful music, and break the violin only as a classical performance. The rules. I’m going beyond it. You don’t have to follow the rules and limit yourself. I want to inspire people to follow and use all their talents. If you don’t limit yourself and don’t give up, you can do it all!”

There is no offer to sell, no invitation to buy, and no recommendation for any securities or any other products or services in this article. In addition, nothing in this PR should be construed as a recommendation to buy, sell or hold any investment or securities, or participate in any investment strategy or transaction. You are responsible for determining whether any investment, investment strategy, securities or related transactions are suitable for you based on your investment objectives, financial situation and risk tolerance. Regarding your specific business, legal or tax situation, please consult your business adviser, lawyer or tax adviser.

Frontline Education launched My Growth Journey at the Learning Forward 2021 conference. This is a new learner-centered landing page for all educators and professional growth users – QNT Press Release