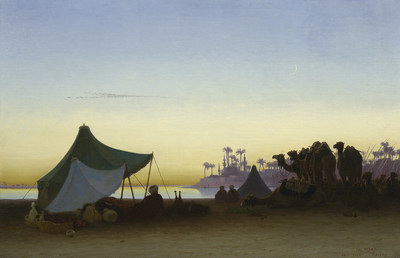 Charles-Théodore Frère received his formal training at the École des Beaux-Arts under Jean-Léon Cogniet (1794-1880) and Camille Roqueplan (1802-1855), and exhibited his first painting at the Paris Salon of 1834 titled Vue des Environs de Strasbourg. In the late 1830s, Frère spent about two years in Algeria and soon became one of the first-generation artists committed to the Orientalist theme, immersing himself in this study throughout his lifetime. During the 1850s, he spent several years in Egypttraveling down the Nile numerous …