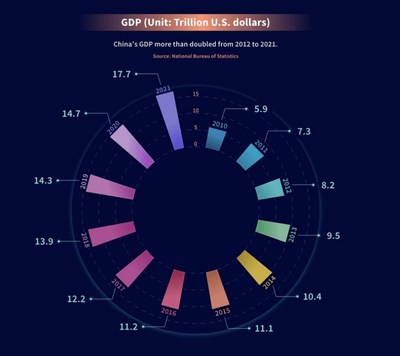 BEIJING, Nov. 2, 2022 /PRNewswire/ — As China looks ahead to the future after the 20th National Congress of the Communist Party of China (CPC), let’s recount how the world’s most populous country has fared during the past decade in its journey of economic, political, cultural, social and environmental development.

An analysis of the last two Five-Year Plans (FYPs) shows that rapid and sustainable economic development as well as industrial restructuring emerged as two of the main focuses of the 2011-2015 period, while the 13th FYP (2016-2020) aimed to maintain a medium-high rate of growth.

While China’s GDP more than doubled in the past decade, the contribution of its economic growth to the world economy stands at 18.5 percent.

Moreover, China made substantial leaps in scientific and technological development, building its own space station for future international collaboration and launching missions to the moon, Mars and beyond.