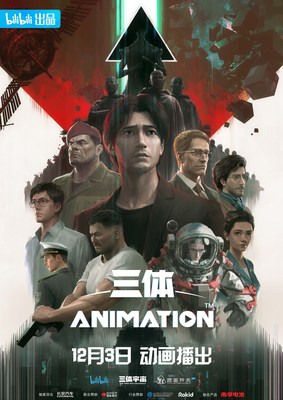 SHANGHAI, Oct. 29, 2022 /PRNewswire/ — Bilibili Inc. (“Bilibili” or the “Company”), an iconic brand and a leading video community for the young generation in Chinaannounced 49 Chinese anime series lineups at its annual ANIME MADE BY BILIBILI 2022-2023showcasing Bilibili’s new initiatives in the Chinese animation sector.

As its principal producer and financier, Bilibili also announced the latest progress in producing The Three-Body Problem animated series, which is an adaptation of Liu Cixin’s titular Hugo Award-winning sci-fi trilogy. The series is co-presented by China’s top sci-fi company The Three-Body Universe, and China’s top animation studio YHKT Entertainment.

Since the project was announced in 2019, The Three-Body Problem‘s trailer on Bilibili has attracted 3 million followers and 40 million views. Bilibili has officially announced that the series is scheduled to debut on December 3rd. It will also be shown on satellite TV channels and overseas video platforms for both Chinese and overseas audiences to enjoy.

As one of the most popular sci-fi novel series of the past twenty years, The Three-Body Problem trilogy broke language and cultural barriers and has inspired millions of readers globally. Preceding the launch of The Three-Body Problem animated series, there have been many excellent fan creations. At this year’s ANIME MADE BY BILIBILI, the company also collaborated with The Three-Body Universe, the rightsholder of the Three-Body IP, to launch the Three-Body Global Creator Project. The Project invites top animation creators across the world to explore the IP in their own unique vision and aims at presenting to global audience a wide variety of art styles and the infinite potential of Three-Body animation.

“I am excited to announce that…