Western countries have accused Russia of plotting to use a threat of a dirty bomb laced with nuclear material as a pretext for escalation in Ukraine as Moscow evacuated civilians from a southern city in anticipation of a major battle.

With Ukrainian forces advancing into Russian-occupied Kherson province, top Russian officials phoned their Western counterparts on Sunday and Monday to tell them Moscow suspected Kyiv of planning to use a so-called dirty bomb.

In a joint statement on Monday, the foreign ministers of France, the United Kingdom and the United States said they had all rejected the allegations and reaffirmed their support for Ukraine against Russia.

“Our countries made clear that we all reject Russia’s transparently false allegations that Ukraine is preparing to use a dirty bomb on its own territory,” they said. “The world would see through any attempt to use this allegation as a pretext for escalation.”

Russia’s RIA news agency reported Gerasimov also spoke to the chairman of the US Joint Chiefs of Staff, Mark Milley, on Monday, eight months to the day since Russia invaded Ukraine.

Russia’s defence ministry said the aim of a dirty bomb attack by Ukraine would to blame the resulting radioactive contamination on Russia.

“The aim of the provocation would be to accuse Russia of using a weapon of mass destruction in the Ukrainian military theatre and by that means to launch a powerful anti-Russian campaign in the world,” it said, adding that it had prepared its forces to work in conditions of radioactive contamination.

Al Jazeera’s Harry Fawcett, reporting from Kyiv, said Russia’s dirty bomb accusations are seen by Ukrainian President Volodymyr Zelenskyy as “an attempt by the Russians to escalate the rhetoric and potentially the ground for some kind of false flag” attack.

“[Zelenskyy] said these claims coming from Russia were absurd and dangerous, … that Ukraine was a member of the non-proliferation treaty and had no such nuclear capabilities or ambitions and that when Russia makes these sorts of allegations, it means it’s planning something itself along such lines,” Fawcett said.

Russia has ordered civilians to evacuate territory it controls on the western bank of the Dnipro River, where Ukrainian forces have been advancing since the start of this month shortly after Moscow claimed to have annexed the area.

A Russian defeat there would be one of Moscow’s biggest setbacks yet.

Kherson’s regional capital is the only big city Russia has captured intact since its February 24 invasion, and its only foothold on the west bank of the Dnipro, which bisects Ukraine. The province controls the gateway to Crimea, the peninsula Russia seized and claimed to have annexed in 2014.

The Russian-installed authorities in Kherson announced on Monday that men who stay behind would have the option of joining a military self-defence unit. Kyiv accuses Russia of press-ganging men in occupied areas into military formations, a war crime under the Geneva Conventions.

“They are creating the illusion that all is lost. Yet at the same time they are moving new military units in and preparing to defend the streets of Kherson,” he told the Ukrainska Pravda online media outlet. 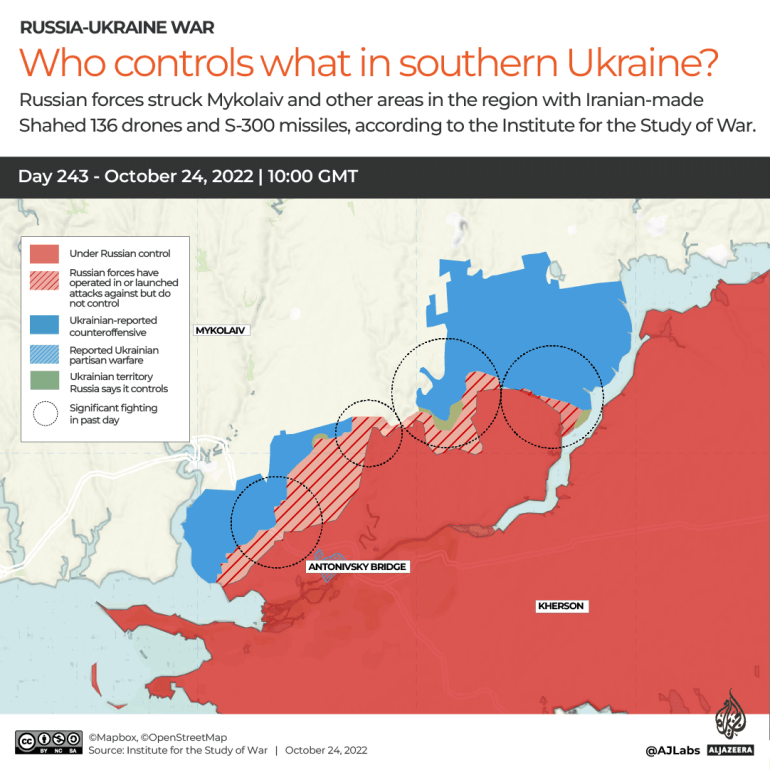 The General Staff of the Ukrainian Armed Forces said on Facebook that Russian forces had launched three missile attacks and seven air raids throughout Ukraine in the past day, damaging infrastructure in heavily contested areas of the Donetsk region in the east and in areas of the Kharkiv region in the northeast freed last month from Russian occupation.

About 10 towns came under attack in the Zaporizhia region of central Ukraine, it said, as did eight towns on the southern front.

Meanwhile, Kyiv on Monday accused Russia of purposefully delaying the arrival from Turkey of more than 165 cargo ships heading to Ukrainian ports to be loaded with grain.

Russia’s inspectors “have been significantly prolonging the inspection of vessels. … As a result, more than 165 vessels have been stuck in a queue near the Bosphorus Strait and this number continues to grow daily,” the Ukrainian foreign ministry said.

“We have reason to believe that the delays in Russia’s inspections of the grain initiative’s vessels are politically motivated,” it added.