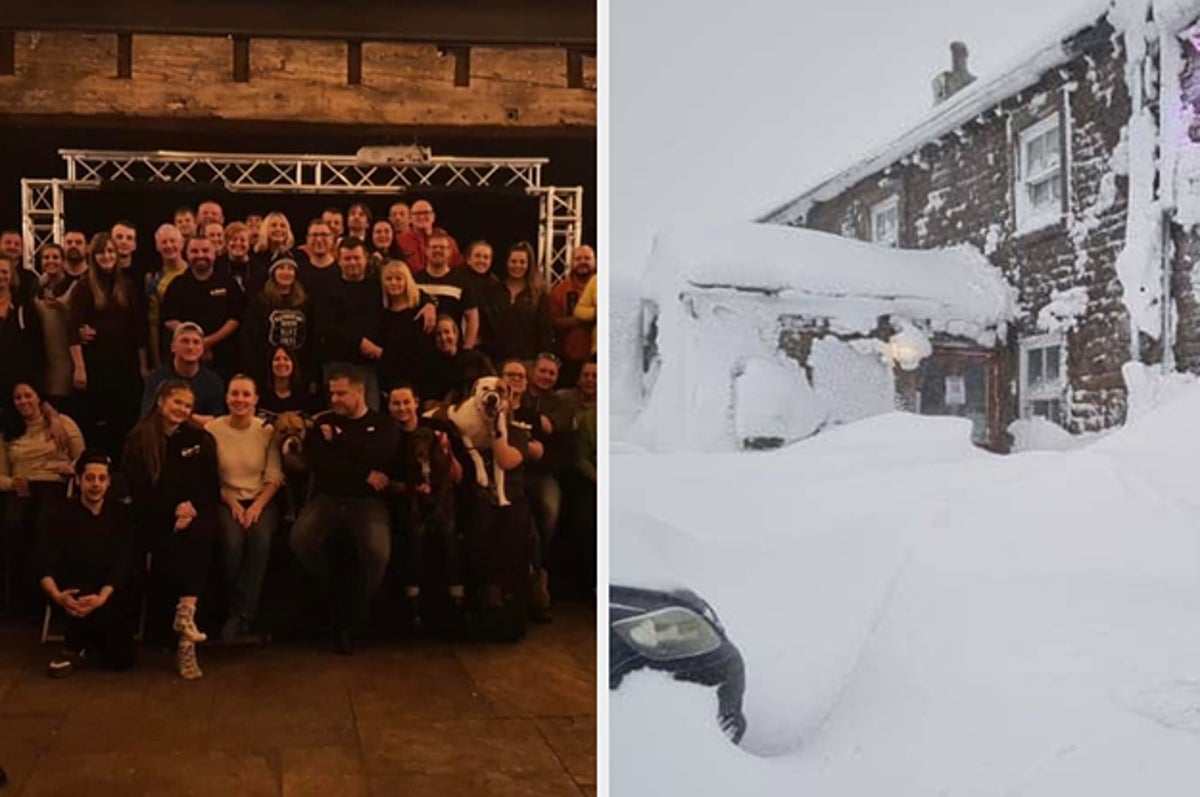 On Friday night, dozens of people braved cold weather and headed to a remote pub in Yorkshire, England, to listen to some live music and enjoy a few drinks.

The unexpected stay was a result of Storm Arwen, which blanketed the region in heavy snow and lashed power lines with winds as high as 98 mph, leaving tens of thousands without power.

More than 100 tickets had been sold for the Friday performance by the Oasis tribute band, Noasis, at the Tan Hill Inn, but in the end, only 61 people made the trek to the pub. As winds blustered outside, revelers in the pub’s music hall danced and swayed to the band’s rock cover of “Wonderwall.”

“It was mental. You opened the door and could see how high it was,” said Becky Longthorp, who had traveled two hours from her home to watch the band. “We’d been drinking as well, so it felt disorientating. I was like, ‘This is dangerous.’”

So that was when everyone at the Tan Hill Inn — the patrons, the staff, even the band — all decided to stay the night. And then on Saturday, they stayed another. And then another.

“We arrived on Friday and with the weather becoming stronger I knew it was going to be a long weekend!” patron Tom Rigsby told BuzzFeed News.

Like many British taverns, the Tan Hill Inn has a few guest rooms and beds, but certainly not for that many people. Some had traveled to the gig in camper vans, but many others had been planning on leaving after the show. Longthorp had intended to camp in a tent. Instead, they all had to sleep in the pub.

“It was a blizzard. It was insane. The wind had ripped the tent to shreds,” Longthorp said. “The first night there were maybe 15 of us on sofas. We just lay where we could. It was like an adult sleepover!”

“It was when we woke up on Saturday morning, and you’re thinking, Hang on a second. This isn’t so fun.”

Located in the Yorkshire Dales National Park, the Tan Hill Inn is Britain’s highest pub, sitting at an elevation of 1,732 feet above sea level. Snow is a frequent headache. When the former owner sold the pub in 2017, she warned she’d been snowed in about 50 times in her 12 years there. In 2010, 30 New Year’s Eve revelers were stranded there for three days. Around 200 people were forced to spend the night in 2016 after watching the band Scouting for Girls perform.

When the sun rose this Saturday after that first night, the scene around the Tan Hill Inn resembled a frozen tundra. Cars had been enveloped by snow, which was blocking the pub’s doors and windows. Even if you could dig your way out, officials in the area were warning it still wasn’t safe to drive.

A meeting was held in the hall where the band had played the previous night. Everyone would just have to continue to stay put. But with power lines down and abandoned vehicles blocking roads, those trapped knew that help was a long way off.

“However, we were warm and safe so we had to embrace the situation!” Rigsby said.

To pass the time, guests played board games and cards with one another. They sang karaoke and held a trivia competition. The band, who apologized to fans that they would be unable to make their next show in Essex, even sang a few more tunes. Some meals were provided for free, but other food was sold at half price. Alcohol continued to flow — it is a pub, after all.

“​​We were all drinking solidly for three days,” Longthorp said. “I think they got their money’s worth.”

As word spread of the pubgoers’ predicament, tavern owner Nicola Townsend began doing media interviews. She appeared on the British morning TV shows, on Sky News, the BBC, and on the radio. She was interviewed by the New York Times. The story made headlines in Italy, Germany, and Sweden. All the while, she was still trapped.

“It’s like having a very large group of friends ’round for dinner,” Townsend told the Telegraph newspaper. “They’ve formed quite a friendship — like a big family is the best way I can describe it. One lady actually said: ‘I don’t want to leave.’”

Guests lavished praise on the hardworking staff, who kept them safe and fed them warm roast dinners. Patrons passed around a collection tray, raising hundreds of dollars to thank the seven employees for their unexpected three-day shifts.

By Monday morning, the snowplows had cleared the neighboring roads and guests could finally depart. Longthorp said she was thrilled to get home and change out of the clothes she had worn since Friday. Rigsby said he was relieved to be back in his own bed.

“We were definitely ready for a shower, but I think we will be OK off the wine for a night or two now,” he said.

On the pub’s Facebook page, staff shared a photo of the guests crowded together in the music hall, stranded but smiling. “We will ALWAYS remember this group of amazing people who came together, and hopefully, in challenging circumstances, enjoyed what we all think was a life-changing experience,” bar staff wrote.

There’s already chatter that the guests may return to the Tan Hill Inn next year for a reunion — although perhaps with more overnight supplies.

“I think it’s the whole spirit,” Longthorp said of the story’s global appeal. “Everybody has thought of getting stuck somewhere. But in a pub? How cool is that!”