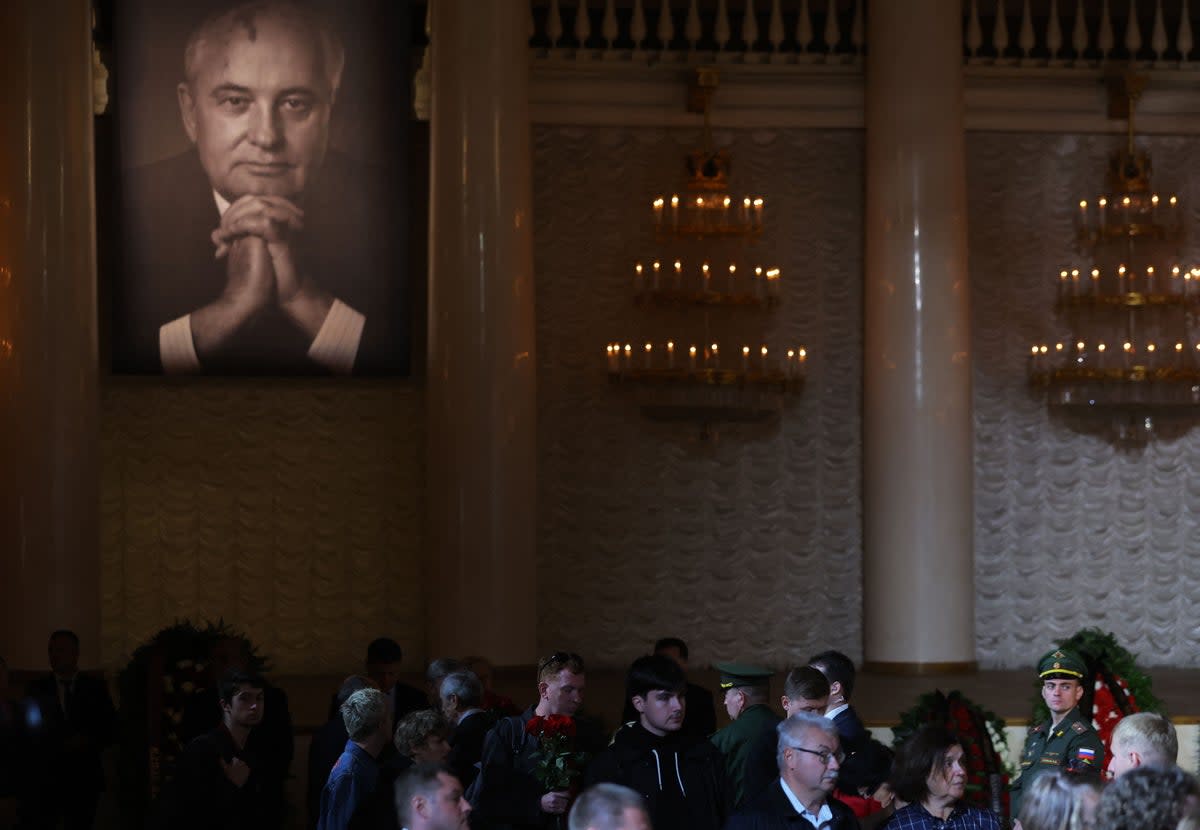 Thousands of mourners turned out to pay their respects to former Soviet Union leader Mikhail Gorbachev, but one prominent Russian was notably absent: President Vladimir Putin.

The Kremlin did not declare a state funeral for Mr Gorbachev, highlighting the current administration’s unwillingness to celebrate the last leader of the Soviet Union, according to a report in the Associated Press. Mr Gorbachev is largely credited as having brought down the Iron Curtain and ending the communist way of life in Russia.

While he is celebrated in the US for bringing about the end of the Soviet Union, his legacy is more complicated among Russians. The fall of the Soviet Union was marked by widespread economic hardship that left millions in poverty and set the stage for wealthy Russians and foreign, private investors to take control of capital in the country.

Though he did not attend Mr Gorbachev’s public viewing at the House of the Unions in Moscow, Mr Putin did lay flowers at the former leader’s coffin at the hospital where he died.

Mr Putin has generally avoided any direct criticism of Mr Gorbachev, despite calling the collapse of the Soviet Union the “greatest geopolitical catastrophe of the century.”

When he has offered criticism, it has been centered on Mr Gorbachev’s failure to secure written commitments from Western nations that they would reign in NATO expansion, which has been the cause of increasing tension between Russia and the West for decades.

“He led the country during difficult and dramatic changes, amid large-scale foreign policy, economic and society challenges,” Mr Putin said in a letter Wednesday. “He deeply realized that reforms were necessary and tried to offer his solutions for the acute problems.”

According to the Kremlin, Mr Putin was keeping a busy schedule of meetings and phone calls so he was unable to attend the public event.

Mr Gorbachev died at the age of 91 on Tuesday, and will be buried at Moscow’s Novodevichy cemetery. He will be interred next to his wife, Raisa.

Despite conflicting views on Mr Gorbachev’s legacy, lines to view the former leader extended beyond the doors of the House of Unions and required officials to extend the viewing period by an hour.

Had the Kremlin called a state funeral for Mr Gorbachev, it would have obliged Mr Putin to make an appearance and for Russia to invite foreign leaders, a move Moscow was likely reluctant to take in light of heightened international tensions caused by the nation’s war in Ukraine.

At least one foreign leader did attend the public viewing; Hungarian Prime Minister Viktor Orban, who — like Mr Putin — is socially conservative and has taken a hard-line stance against the West and its sanctions against Russia resulting from its invasion.

British, US and German ambassadors also attended the viewing.