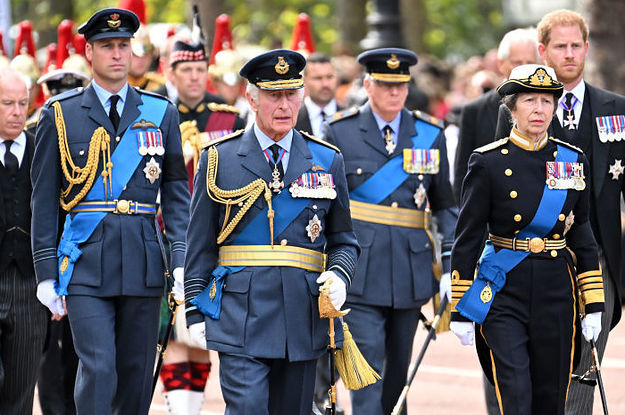 Members of the public lined the streets of London to watch the events, and screens were set up around the city to broadcast the procession.

“To be a part of this and feel this atmosphere and the love that all of these people have for the queen, it’s incredible,” said Sharon Osborne, who told BuzzFeed News she traveled from her home in Los Angeles to London to pay her respects.

“It’s one of those things that you’ll never forget,” she said.

As Wednesday, there is already plans for a five-mile line of people to wait to pay their respects ahead of the Queen’s funeral.

Some observers struggled to put into words their reasons for traveling into the city to see the commemorations.

“It’s a difficult question to answer. I feel a sense that it’s history. I think it’s just the right thing to do,” said Richard, a Hertfordshire resident who declined to give his last name. “It’s a very visceral thing. I want to contribute in some way.”

At around 1 p.m. local time, police began directing mourners away from Parliament and Buckingham Palace, telling the crowds that the area was full. Large green fencing was erected to prevent people from joining the procession, upsetting some in attendance.

“It’s poignant to be here. Her Majesty is an amazing person,” said Carole Alan Morley, who said her mother had observed the Queen’s 1953 coronation. “[My mother] would be here if she could but she’s died. I’m completing the circle.”